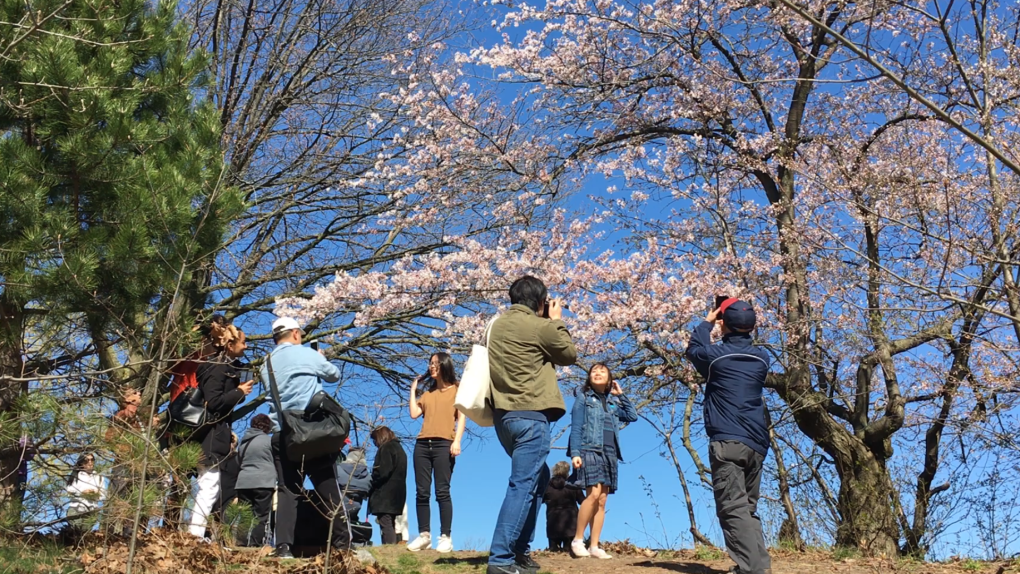 TORONTO -- If you were hoping to catch a glimpse of the cherry blossoms in High Park this spring, you will have to do it through a computer screen.

Mayor John Tory announced Wednesday that the city will be closing High Park during cherry blossom season to prevent the spread of COVID-19. He said Torontonians will be able to experience the blooms this year through multiple livestream events.

He said the closure is “one more sacrifice” residents need to make to continue the progress the city has made in the fight against the virus.

“Believe me, I have no interest in closing a park, nor does any city official nor does any member of the city council,” Tory said. “But I do want to save lives, and I certainly do want to stop the spread of COVID-19 so that we can get back to cherry blossom festivals and many other kinds of events and just our normal lives in future years and in future weeks for that matter and so that we can get on with restarting our entire city as soon as possible.”

The mayor said staff are still finalizing the details of the livestreams, but said they are planning to add other "features" that would make it “something that people can tune in (to) a number of times.”

Tory said the closure of High Park would apply only for the duration of the cherry blossom season, starting from pre-bloom to peak bloom. The city has previously closed all amenities within its roughly 1,500 parks, but the green spaces themselves remain open.

He said other countries like South Korea and Japan have announced similar measures to control the cherry blossom crowd during the pandemic.

“We know that maintaining physical distancing is simply not possible with the size of crowds that come through High Park every year to see the blossoms,” Tory said.

The mayor said the dates for the closures will be weather dependent and will be announced closer to the time of the bloom.

Tory said signage and barriers would be erected in the park to notify the public that it is closed. He said police and bylaw officers would also be on hand to enforce the closure.

“It has been heartbreaking, absolutely heartbreaking for me to tell you of the postponement of various of our most beloved events like Pride, the Caribbean Carnival and the Jazz Festival, and the list goes on.

“But if that’s part of what it takes to get through this virus -- to put it behind us and to save lives and to save the health of the people of this city -- then I’m down for doing this, and I hope that I will have your support,” Tory said.

He said those caught accessing the park during the closure could face a minimum fine of $750, but the maximum fine could be up to $5,000.

During the closure, the park will undergo an extensive spring cleaning, Tory said.

“We know the cherry blossoms will bloom again next year and I look forward to seeing them in person as I’ve done many a year with as many Toronto residents as can come out at that time a year from now,” he said.

Tory said the cherry blossoms area at Trinity Bellwoodz Park would be enclssed by fencing with enforcement patrols during the bloom period.

Other smaller sites with cherry blossoms will be monitored by police and by-law officers, the mayor said.

The announcement comes after weeks of discussions among city officials and police.

Large crowds, sometimes numbering in the hundreds, typically show up at High Park as soon as the dozens of cherry blossoms trees planted in the vicinity of Grenadier Pond begin to bloom in late April or early May.

“You know we want to do this in a way that is respectful of the fact that we got to adhere to reasonable constrains on people but at the same time it is a very big practical undertaking to try to close off part of a park like that,” Tory said Wednesday morning during an interview with CP24. “It is still probably 10 days away according to the blossom predictor. We will just do our very best to make sure people can see this but they really can’t be part of a crowd scene this year.”

Toronto not in position to ease public health measures: doctor

The city's medical officer of health said Toronto is not yet in a position to ease up on public health measures on a large scale.

Dr. Eileen de Villa said Wednesday the city needs to see better control over the virus in the community before COVID-19 restrictions are relaxed.

"In order to get to the point where we can go back to enjoying our city with our friends, our families, and our loved ones, we need to stay the course," de Villa said.

De Villa said that while the virus is peaking and the curve is flattening, the city continues to see cases and deaths in long-term care homes.

"This is very concerning," she said. "In order to turn the tide in these settings, not only will they need to implement outbreak control measures, but we also need to keep our public health measures in place throughout our community."

De Villa said there is no timeline for the re-opening of the city.

"When the time comes, we will need to strike a delicate balance between easing up on measures for our broader community while keeping the residents of our long-term care homes and other vulnerable residents in our city safe."