The travel headaches and turbulence that have become commonplace in recent months at Canada’s busiest airport appear to be turning a corner.

“We are indeed far from the finish line, but the actions of the GTAA, the federal government, the agencies, the airlines, and many other partners working concertedly together are indeed having a positive impact,” GTAA President and CEO Deborah Flint said.

Flint said the airport has seen “measurable” operational improvements in recent weeks following a surge in travel demand brought on by the lifting of public health restrictions amid the COVID-19 pandemic.

Those improvements are being seen specifically in metrics related to security wait times, flight delays, cancellations, and baggage delivery.

According to Flint, data from the Canadian Air Transport Security Authority (CATSA), which screens passengers prior to boarding at the airport, shows that 82 per cent of passengers who boarded a flight last week cleared security in less than 15 minutes.

That’s an improvement of one percentage point over the rolling average for the last four weeks, which Flint said is due in part to CATSA’s hiring of “hundreds” of new employees.

Flight delays at Pearson are also shrinking, says the GTAA -- if only slightly. 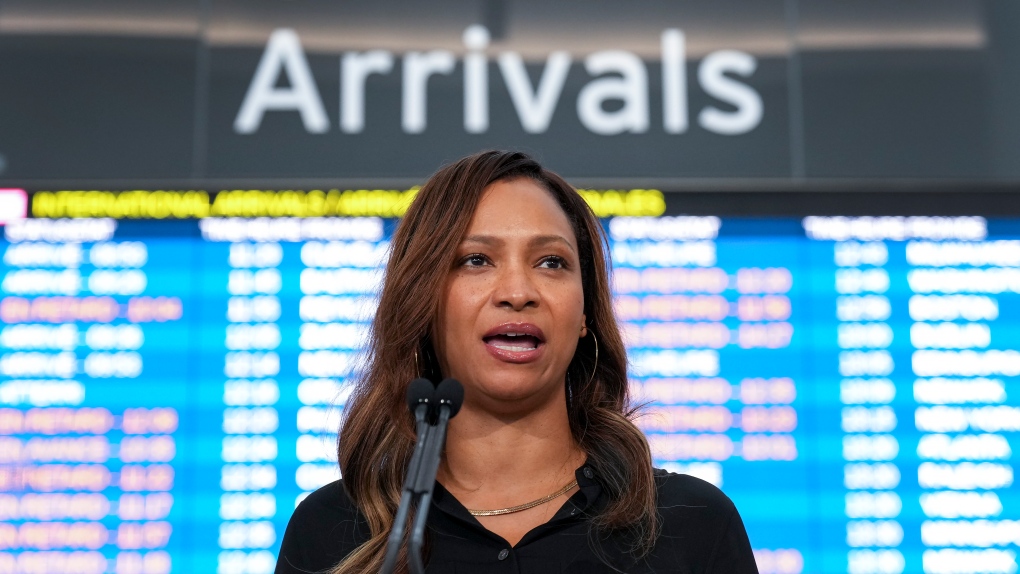 Flint said that, as of last week, 44 per cent of all flights were on time. While she admits that this is not a number the GTAA would normally tout as a success, Flint said it is a “substantial” improvement from last month’s statistic of 35 per cent.

Passengers who have recently arrived at Pearson from travel abroad may have been asked to wait on the tarmac due to delays at customs. Flint said that process is also seeing an improvement due to an increase in the number of Canada Border Services Agency (CBSA) officers at the border.

Last week, only 19 planes were held upon arrival due to lines in the customs hall. In July, the rolling average of planes held was 60 per week.

Flint also credited the “streamlining of the ArriveCAN app” as a part of the reason planes are being held on the tarmac less often. Earlier this week, Pearson touted the app’s new advance declaration feature -- which allows travellers to submit their customs and immigration information up to 72 hours before their arrival -- as an effective way to save time.

Meanwhile, wait times at the baggage carousel also appear to be dropping.

Flint said that domestic passengers were waiting an average of 24 minutes for their belongings post-flight. That’s three minutes less than they were waiting last month.

The GTAA said it will make the metrics discussed during Friday’s news conference available to the public in the weeks and months ahead as a way of providing passengers with an “at-a-glance resource” of the airport's operations.

As well, travellers can access interactive infographics and a “peak times dashboard” to help them navigate the airport as more and more people flock to take a trip.

And while the messaging delivered by Flint on Friday was overwhelmingly positive, few operational benchmarks for the future were actually mentioned at the progress update, aside from Flint saying she "looks forward" to the day when on-time targets are back above 70 per cent.

However, Flint said she and her team are “committed” to delivering the “best experience for Canadians and international travellers” -- despite being named the world’s worst airport for delays by the Wall Street Journal last month.

“We will continue to solution. To be persistent, to continue to innovate, to create new opportunities and solutions, not just to get back to where we were, but to create the opportunity for the airport of the future,” Flint said.

People line up before entering the security at Pearson International Airport in Toronto on Friday, August 5, 2022. THE CANADIAN PRESS/Nathan Denette

A U.S. court has sentenced a Canadian man to 20 years in prison for his role in a number of cyberattacks involving the ransomware NetWalker.

Alberta’s governing United Conservative Party is scheduled pick the province’s new premier Thursday, and political observers say its next step should be getting back on the same page as the rest of the province.

Russian President Vladimir Putin signed the final papers Wednesday to annex four regions of Ukraine while his military struggled to control the new territory that was added in violation of international laws.

'Unheard of': Tens of thousands of salmon found dead in B.C. creek as drought conditions persist

B.C.'s sunny, dry weather is leading to major drought conditions in parts of the province, causing devastating impacts for some wildlife.