Mayoral hopeful Gil Penalosa has unveiled a new transit plan, which would see more than 60 kilometres of high-speed bus lanes installed across Toronto.

The plan, dubbed ‘FastLane,' would involve 62 kilometres of separated, high-speed bus lanes and another 30 kilometres of bus-only lanes.

Penalosa says that the plan will cost $3.2 billion and would be mostly complete within his first term.

“In the first four years, we’re going to deliver most of it, and whatever is not can be done in another four years,” he said during a press conference at Dufferin Station.

“We need a mayor who’s going to be a leader on transit, not a mayor who is mediocre at best on transit,” said Bell. “Bus rapid transit is the single most cost effective way to make transit faster across our city.” 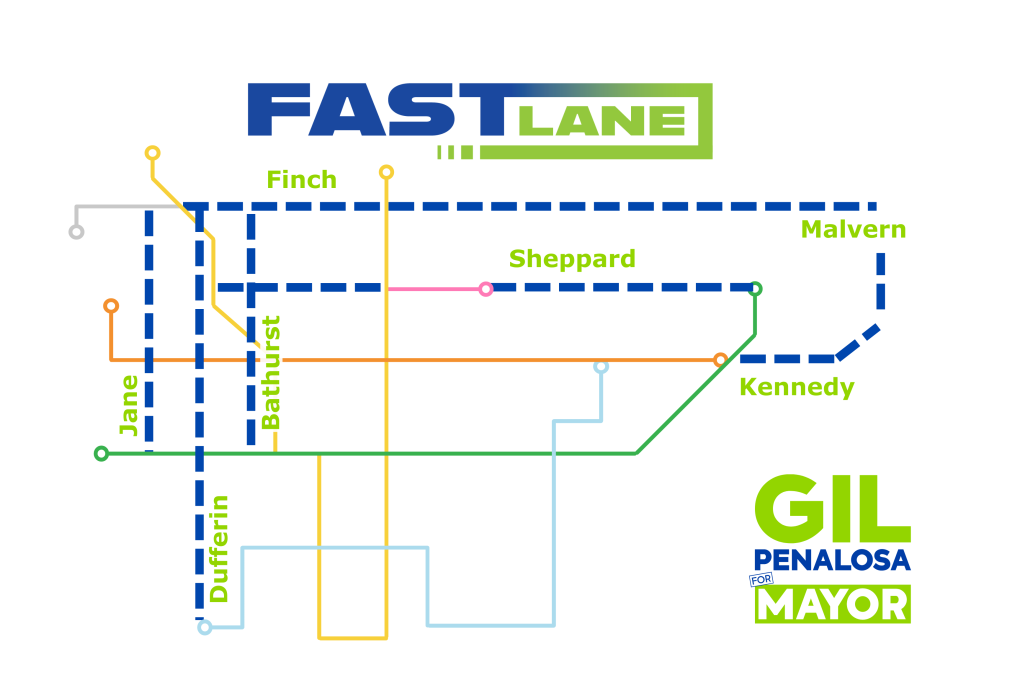 In a press release, Penalosa’s campaign said that the cost of the plan will be offset by directing $500 million in savings from cancelling a plan to rebuild a portion of the Gardiner East Expressway to transit expansion.

He also wants to put $1 billion in revenue from a property tax levee to fund transit towards the cost of the rapid bus lanes, while asking other levels of government to make up the difference.

“The FastLane system is built on similar innovative, proven rapid transit systems around the world, including those in Los Angeles, Hong Kong, Bogota and Seoul,” the release said. “Penalosa’s plan will get Torontonians moving with modern electric vehicles that make stops at covered stations as frequently as subway service.”

The release of Penalosa’s transit plan comes after John Tory held a press conference last week, where he committed to helping push through a $28 billion transit expansion plan for the GTA, which is being led by the Ontario government.

The plan encompasses the Scarborough subway extension, the Ontario Line, and the Eglinton Crosstown West extension, as well as the Yonge North Subway extension to Vaughan, Markham and Richmond Hill.

Tory has said that one of the biggest reasons he is seeking a third term as mayor is to ensure this transit expansion gets done.

Penalosa, however, said that his plan will get built more quickly and can complement the planned expansion of Toronto’s subway system.

“Everything that I’ve been proposing from day one, every single policy, is up to the mayor and city council,” said Penalosa. “We need to stop talking and start doing, which has not happened in the last eight years.”

The Senate passed bipartisan legislation Tuesday to protect same-sex marriages, an extraordinary sign of shifting national politics on the issue and a measure of relief for the hundreds of thousands of same-sex couples who have married since the Supreme Court's 2015 decision that legalized gay marriage countrywide.