Mayor John Tory is pleading with residents to respect the closure of playgrounds, sports courts and other facilities within city parks amid reports that some people have torn down signage and ripped off tape that was put up to keep people away amid the global COVID-19 pandemic.

On Wednesday the city announced the closure of all facilities located within the more than 1,500 parks across Toronto, including playgrounds, basketball courts, tennis courts and off-leash dog areas.

Since then, city workers have fanned out across the city to put up signage and tape advising residents of the closure.

Tory, however, told CP24 on Sunday morning that he is beginning to hear reports of people knocking down signs and tearing down tape so that they can access the facilities in contravention of the city order.

“I hear this stuff and I sort of sometimes think it is being made up but I know that it is not because it our officials who are telling me. People are tearing down the signs that we put in the parks to say that the amenities are closed. They are tearing the signs down and they are taking the tape off,” he said. “I mean come on people. We are not doing this because we are trying not to be nice. We are doing this because this is what the health officials tell us we have to do to stop Toronto from going in the direction of New York City or worse. We just can’t do that. It would involve loss of life for our fellow Torontonians, it would involve a huge strain on the healthcare system with many more people becoming sick and it is going to involve this (the disruption to public life) lasting a lot longer.”

Tory said that he made the “difficult decision” to close all facilities within city parks solely on the basis of advice from public health officials, who indicated that it necessary to help limit the spread of COVID-19 within the community.

While those who are found trying to access facilities that have been shuttered could face fines of up to $5,000, Tory said that he would prefer that people would cooperate so “this whole nightmare can be over a lot sooner.” 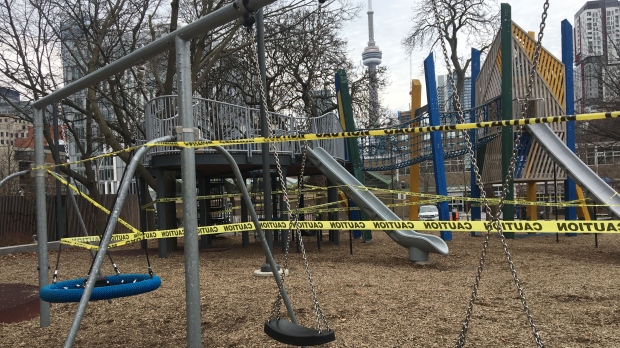 “I would ask people to please cooperate. Please act as if you have been asked - because you have - to stay home, to stay away from these places,” he said. “It is not because we are trying to be killjoys. We are trying to stop a health emergency here and to have it come to an end as soon as possible.”

Tory said that city workers have already had to padlock off-leash dog facilities because people weren’t respecting the order and may take further steps to ramp up enforcement.