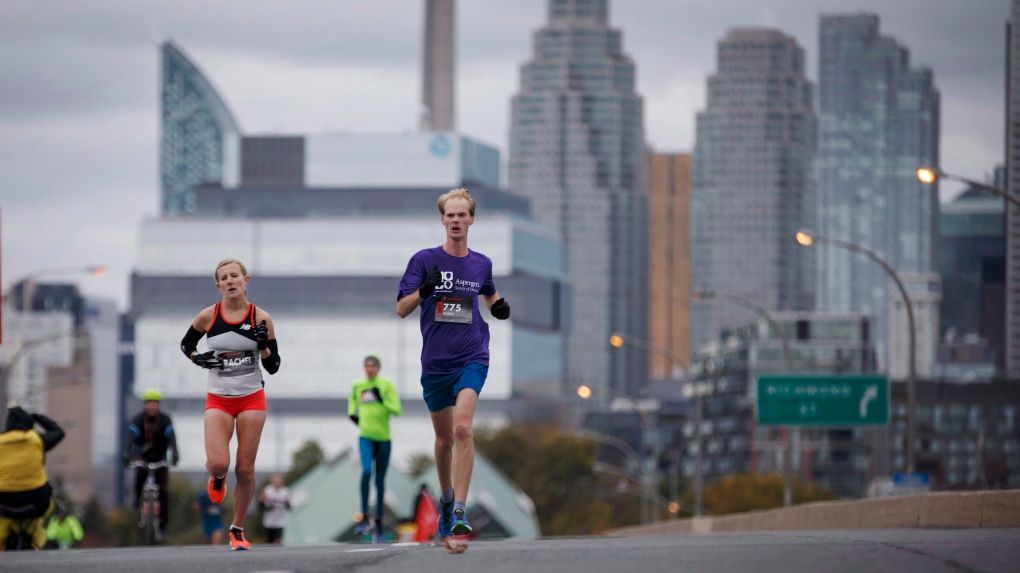 Runners make their way along the route of the Toronto Scotiabank Waterfront Marathon on Sunday, Oct. 21, 2018. (THE CANADIAN PRESS/Cole Burston)

TORONTO -- Toronto has cancelled all city-led and permitted events through the end of September and will also revamp its all-night Nuit Blanche art festival into an online-only affair for this year only.

Mayor John Tory, however, confirmed at his bi-weekly briefing on Monday that a decision has now been made to cancel all city-led and permitted events though Sept. 30.

That will wipe out a number of popular street festivals such as the Taste of the Kingsway, the Cabbagetown Festival and the Roncesvalles Polish Festival. It will also preclude the Toronto International Film Festival from staging its annual “Festival Street” event along King Street, though TIFF itself is expected to continue in a reduced form.

“To continue the progress we have made to reduce the spread of COVID-19 the city is extending the cancellation of city-led and city permitted outdoor special events through Sept. 30,” Tory said in making the announcement. “I know that this is a decision that is very disappointing for many and it is a difficult decision for us to make but we believe that it is the right thing for us to do based on public health advice.”

The city has already cancelled numerous major summer events, including Pride Toronto, the Caribbean Carnival and the Taste of the Danforth.

The announcement of the cancellation of dozens of more events through the end of September comes as the city unveils plans to provide free entertainment programming at a number of drive-thru style venues this summer as a way to give residents a few more things to do during the COVID-19 pandemic. .

The “DriveInTO” program, which was also announced by Tory on Monday, will see the city partner with a number of festivals and organizations to provide film screenings and other programming at Ontario Place and at the new CityView Drive-In at Polson Pier.

“From films, to concerts, to sports broadcasts drive in entertainment is a terrify opportunity for Torontonians to reengage with their city and experience the very things that bring us joy,” Tory said. We are doing things differently and learning to adapt to this new way of life.”

The organizers of the Toronto Waterfront Marathon also confirmed on Monday that the race scheduled for Oct. 18 has been cancelled due to “COVID-19 related health and safety concerns.”

The cancellation of that event comes on the heels of most other major international marathons being cancelled, including the Chicago Marathon earlier in the day

"Sadly, we have reached a point where it is clear we will not be able to bring a mass event of 25,000 people from more than 75 countries, safely to downtown Toronto this October, and have officially canceled the 2020 in-person event,” Race Director Alan Brookes said in a statement. “We have shared so many unforgettable moments over 30 years at this race and are enormously disappointed."