“Just want to let you know that Donna Thomson ended her journey and battle yesterday,” a family spokesperson said in an email to CTV News Toronto on Monday.

Thomson was diagnosed with Stage 4 lung cancer in September of 2019. Following the diagnosis, her friends and family decided to launch a campaign in hopes of connecting her with her favourite hockey player.

On January 4, 33-year-old Grant Haire, a neighbour of Thomson’s sister who kick-started the campaign, said that he heard from the director of media relations with the Toronto Maple Leafs. The message said that Matthews had contacted the director and wanted to bring Thomson to an upcoming game. 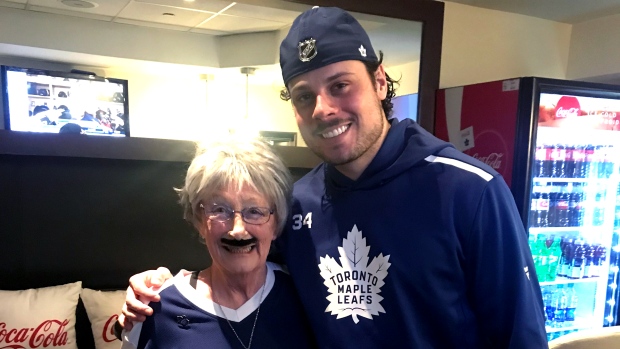 Days later, and sporting a stick-on version of Matthews' trademark mustache and a jersey with his name on the back, the Lindsay, Ont. woman hugged the 22-year-old after the game and said “It’s so nice to meet you.”

The game was the first time Thomson had ever watched her favourite team play in person and she called the experience a “real thrill.”

“I’m a fighter – I could mellow down to it and fall apart but I don’t want to do that, I want to enjoy the rest of whatever time I have. I like to feel like I’m moving forward even if I’m not.”

“I want to thank you and the rest of CTV for helping us get Donna to meet Matthews and fulfilling a dream of hers before she left,”Grant Haire said in an email.

With files from Katherine DeClerq and Kayla Goodfield.