Toronto man sentenced to life in prison for 'senseless' 2009 shooting

In July 2009, a 22-year-old man ripped the chain off another man's neck, then shot him point-blank.

There was no reason. The victim did not resist. And for that, the gunman, now-26-year-old Marvin Jarrett was sentenced Tuesday to life in prison, with no possibility of parole for 14 years.

It was early in the morning on July 25, 2009. Sebastian Herrera, 23, and his long-time girlfriend, Tamara Rodriguez, had been celebrating a friend's birthday at the Brunswick House bar in downtown Toronto.

According to an agreed statement of facts, the pair went to their car in a nearby laneway to have a cigarette. As they walked back to the bar, Jarrett ran toward them.

Jarrett pulled out a gun and demanded that Herrera hand over his watch and a chain around his neck.

"Herrera refused saying 'no' that it was his property. Jarrett then grabbed the chain from Herrera's neck and ripped it off. Herrera demanded the return of his chain but Rodriguez told him to walk away and they began to slowly back away from Jarrett," according to the agreed statement of facts, which was filed in Superior Court in December.

The getaway car, driven by Jarrett's unknown accomplice, knocked Herrera and Rodriguez to the ground.

"Rodriguez was able to stand up and saw Jarrett standing over Herrera who was still on the pavement. Rodriguez describes Herrera as trying to get up from the ground, he was sitting with his legs stretched out and his torso upright but bent forward. Jarrett stood over Herrera and pointed the gun at him," the agree statement of facts reads. "In an attempt to scare Jarrett away Rodriguez told him to stop and that the police were in the area. Jarrett then shot Herrera once striking him in the torso."

That single shot would prove fatal.

"We have all kinds of people going out on regular occasions to enjoy their nights out and it's very disheartening to see something like this happen in our city," lead investigator Det-Sgt. Stacy Gallant said outside the courthouse.

"Totally random victim, someone that was just out with his friends enjoying an evening and didn't deserve whatsoever in any way, shape or form, for this person to come up and try and rob him and just senselessly murder him the way he did."

The stolen getaway car was found within days. Inside, police found a strand of Jarrett's hair, as well as gunshot residue, court heard during Jarrett's sentencing Tuesday.

A month to the day after the murder, Jarrett was arrested.

Justice John McMahon described the killing as "gratuitous, senseless, vicious and a callous act. There was absolutely no reason to shoot this young man. This was not a case of a victim resisting."

Echoing a 2005 appeal court decision, McMahon said, "Deaths by firearms in public places in Toronto plague the city and must be deterred, denounced and stopped...Societies must be protected from criminals armed with deadly handguns."

McMahon acknowledged that, since his arrested in 2009, Jarrett has completed his high school diploma, taken an anger management course and is now studying Psychology.

There were, however, many aggravating factors to consider, McMahon said.

Jarrett and his accomplice had stolen their getaway vehicle earlier in the day; Jarrett arrived with a loaded gun.

Herrera's parents, brother, sister-in-law, as well as Rodriguez's mother, were in the courtroom for the sentencing.

While Herrera's family did not want to speak on camera, they did release a statement, which read in part: "We have had to learn to live without him, and to adapt to not being able to see him, talk to him, or love him. We have had to give up our dream of seeing him have his own family."

The family added that they have learned to cope.

"We have learned to live with just memories of Sebastian rather than his presence. We have found a way to cherish the 23 years that we had with our son and brother instead of despairing over the time that we will not get to have with him," the statement said. "We understand that we have the responsibility and the duty to continue living as best as we can, because this is the only way to honour Sebastian's memory."

Because he has been in custody since his arrest in 2009, Jarrett need only serve nine-and-a-half more years in prison before he will be eligible for parole. He was also put under a lifetime firearm, ammunition and explosives ban, and was ordered to submit a DNA sample. 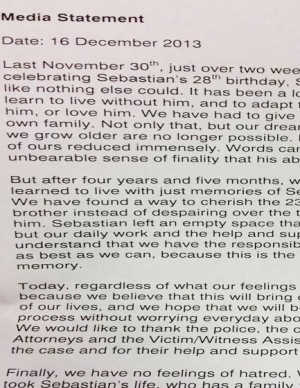 The Herrera family's statement to the media