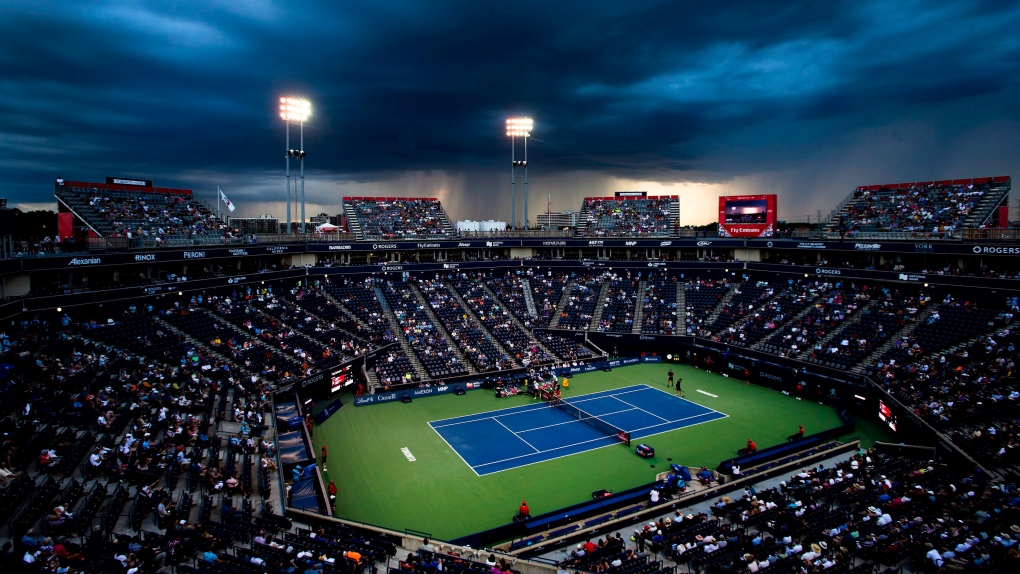 A rain storm forms in the background during semifinal men's Rogers Cup tennis action in Toronto on Saturday, August 11, 2018. THE CANADIAN PRESS/Nathan Denette

TORONTO -- The Rogers Cup men's tennis tournament will not be played in 2020 because of the COVID-19 crisis.

Tennis Canada said in a release issued Wednesday that the event's start date will be pushed back until Aug. 7, 2021.

The annual ATP Tour event, which rotates between Toronto and Montreal, was scheduled to be played Aug. 8-16 at the Aviva Centre at York University.

With the Rogers Cup 2020 women's tournament in Montreal shelved earlier this month and rescheduled for next year in the same city, the men's event also will remain in Toronto in 2021.

Tennis Canada said it considered holding the event without fans, but decided against the idea due to travel restrictions and potential strains on public health.

"Organizing a closed-door event is complex and requires certain important health and operational protocols to be put in place," Gavin Ziv, managing director of the Rogers Cup in Toronto, said in the release. "We estimated that to organize and broadcast such a tournament, we would require having up to 450 people on-site.

"The safety of these people during the two weeks of the event would have been a concern for Tennis Canada and in the current context, the level of risk would have remained high, especially for a sport like tennis where athletes comes from all parts of the world. In addition, at this time, the federal law relating to access to our country and mandatory quarantine would require players to arrive in Canada well before the start of the tournament, which made things much more difficult."

According to Tennis Canada president and chief executive officer Michael Downey, the organization has absorbed a loss of $17 million this year.

"Tennis Canada cannot afford to increase this deficit," Downey said. "As of today, there is no guarantee that a closed-door tournament would significantly mitigate those losses."

Tennis Canada said tickets purchased for the 2020 Rogers Cup will be valid at the 2021 tournament.

"I know that Tennis Canada worked hard and did everything they could to try to make a closed-door event possible, as I personally checked in a few times to see how it was progressing," Canadian tennis star Milos Raonic said in a release. "It saddens me to know that I won't be able to compete in my hometown in August, but I am already looking forward to returning in 2021 and playing in front of a full house in Toronto."

It is the latest major annual Canadian sporting event to announce it will not go off on schedule because of COVID-19. The Queen's Plate horse race, RBC Canadian Open golf tournament and the Honda Indy auto race in Toronto, the Canadian Grand Prix Formula One race and Rogers Cup women's tennis tournament in Montreal, the Vanier Cup varsity football championship and the Calgary Stampede rodeo also won't run on their expected dates.

All ATP Tour events through July have been cancelled or postponed.

The men's tennis tournament has had several different names -- the Canadian Open, the du Maurier Open, the Player's International, the Canada Masters and the Rogers Cup (since 2005).

This report by The Canadian Press was first published June 17, 2020.