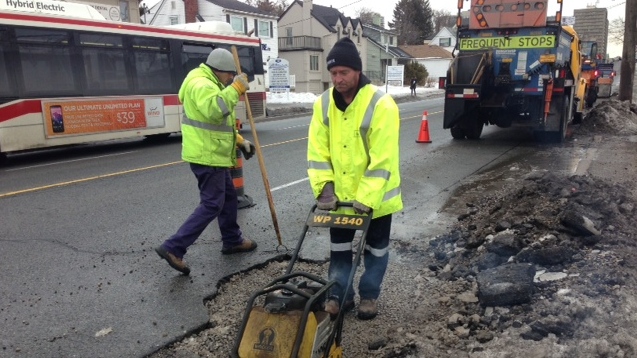 TORONTO -- Toronto is kicking off its first pothole repair blitz of the year on Saturday, in an effort to improve as many roads, streets, and expressways as possible.

The city says drivers and cyclists should expect minor delays today as crews make repairs from 6 a.m. to 6 p.m.

“The first pothole repair blitz of the year is a sure sign that spring is coming and we are working to make sure the roads are safe for everyone using them. Crews have been proactively repairing potholes throughout the winter and workers will take advantage of the sunny and dry weather this Saturday to repair as many as possible,” Mayor John Tory said in a press release.

Approximately 127 crew members will be repairing potholes throughout the city today.

Potholes are prioritized based on major roads first.

“When there are large numbers of potholes to be repaired, they are triaged based on size, and repairs are prioritized on major roads first,” city staff said.

Each pothole costs about $25 to fix and the city has budgeted roughly $4.7 million in 2021 to fix potholes on streets and in bike lanes.

The city says crews can normally repair potholes within four days after becoming aware about them.

City crews conduct year-round patrols to look for potholes but residents are also asked to report any potholes via 311 or on the city’s website.