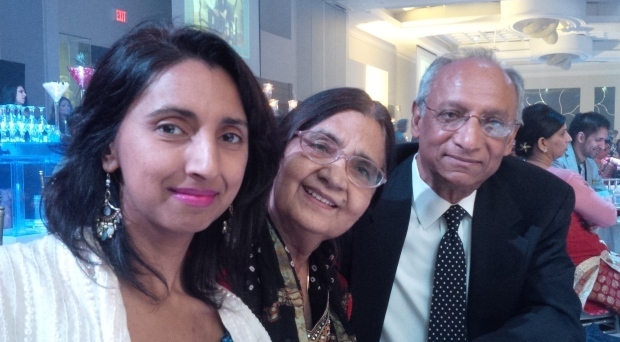 Priya Rao, left, and her parents, Vimla and Hari, started the family business before the island became an oasis for Torontonians to escape to during the summer months. (Priya Rao)

A family-owned bike rental company, devastated after being told there was “no hope” to renew its city contract on Toronto Island, didn’t “quite believe it” when they learned it will get the deal after all.

On Wednesday afternoon, Toronto Island Bicycle Rental was is disbelief after discovering the successful bidder prepared to take over the city contract this summer withdrew its deal for the business the Rao family co-owned for 32 years.

“I don’t think any of us quite believed it,” said Priya Rao, who was nine-years-old when her parents took over the business. “We were just like how can this be happening when we had been told that there is no hope for us?”

The news came a week after the city notified the Raos and business partner, Gordon Chhor, who had already begun selling off a larger portion of their bike inventory to ensure they could vacate the property on Toronto’s Centre Island by Apr. 24.

“While we were negotiating the agreement with the successful bidder, they voluntarily withdrew their bid from the process,” Matthew Cutler, a spokesperson for Toronto Parks, Forestry and Recreation, told CP24 in an email.

The city proceeded to negotiate a new contract with Toronto Island Bicycle Rental, which was its second choice based on its proposal, Cutler explained.

The company did not give a reason for its withdrawal, he added.

The name of the company slotted to take over the five-year contract was never revealed because it was currently negotiating a new agreement with the provider when the deal was first announced last week.

The city had anticipated “a significant increase in revenue to support Toronto Island Park.” It also assured visitors would have “access to a brand new fleet of bicycles” and there would be an “overall refresh” of the bike rental facility.

These upgrades will be met anyway, Cutler said.

“The conditions of the request for proposal required improvements to the facility and a renewed fleet of bicycles that include tandem and quad bikes.”

But the reinstatement of the contract comes with a new set of challenges for the owners who sold off more than half their bike stock last weekend to people who wanted “to have a piece of Toronto history,” in order to meet the city's deadline.

“We will rebuild,” said Rao. “Now we are in a position where we have to re-stock in order to serve the public for May 1, but that’s a minor problem. We’re happy to have that problem."

She previously told CP24 the city’s decision to award the business to a new bidder jeopardized both family’s livelihoods and left them in a “real predicament.”

After learning of this change at 4 p.m. today, Chhor has already reached out to bike companies to ensure they will be ready within the two week time mark.

Rao says they will have enough cruiser and tandem bikes for opening weekend, but will need more time to acquire the quadricycles or “Flinstone cars.”

In the meantime Toronto Island Bicycle Rental says it is planning something special for the community who came out to support them.

“We were so overwhelmed by the support the city has provided and the number of people who came out to buy some of the bikes that we want to return that appreciation to the community,” Rao said.

This event will be announced at a later date. For now, both families are looking forward to kicking off the season on the island where many of them have spent their summers for more than 30 years.