TORONTO -- City council has voted unanimously in favour of a budget that includes money to hire hundreds of new police officers, paramedics and TTC operators but is balanced on the basis of millions of dollars in assumed federal funding.

Following an hours-long debate, council voted 25-0 to approve the $13.53 billion operating budget and the $43.46 billion 10-year capital budget. The vote came early Wednesday evening after a separate vote earlier, in which council approved a two per cent property tax hike as part of the 2020 budget.

The increase, however, goes up to 4.24 per cent (an average increase of $128) when you tack on a 1.5 per cent increase to the city building levy that was approved in December and various other policy-related adjustments.

Speaking with reporters ahead of Wednesday’s meeting, Mayor John Tory conceded that the “modest tax increase” will make life difficult for some residents but he said that it will help fund important investments in transit, housing and community safety that the city can’t keep pushing off.

“We are very mindful of that (the impact of the tax hike on residents) but we are also mindful that it could cost a lot more in the future if we don’t invest in transit, affordable housing and community safety now,” he said. “We could pay a much bigger price and people could find it much more perilous to be living in the city if we don’t make those investments today.” 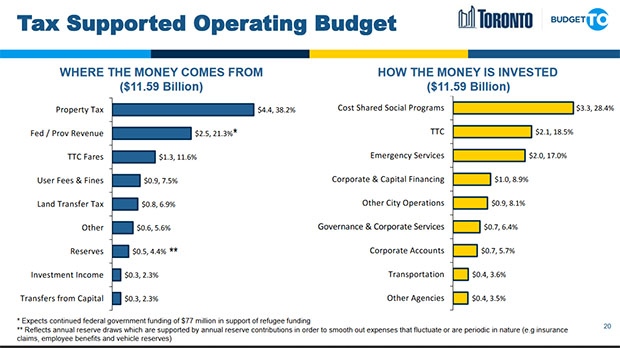 Tory said that the budget is “responsible, realistic and forward looking” and does a good job of balancing all the competing interests that exist in the city.

It includes $75 million in new investments, including a $6 million investment that was championed by Tory to address the roots of violence. The majority of that money will go towards funding a series of new youth violence prevention grants and opening eight new youth hubs in public library branches.

The budget also includes millions of dollars in funding to allow the city to hire more than 300 police officers, 62 paramedics and 121 TTC operators.

“86 per cent of the people in new positions are non-management positions. These are people who will be visible to the taxpayers, visible to the people of Toronto every single day. They will be on the street delivering services to people. Driving buses, saving lives, keeping people safe,” Tory said. 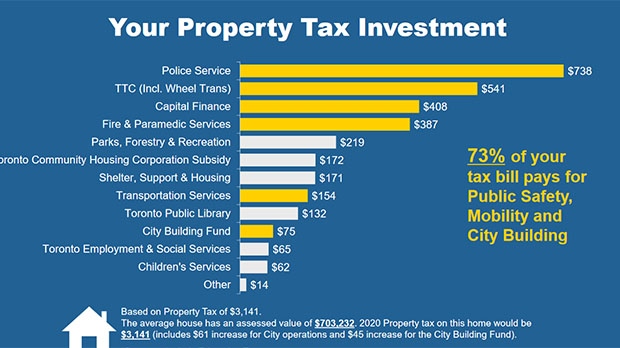 The proposed tax increase will raise an additional $63 million to pay for city services while a reduction of a solid waste rebate previously given to residents with smaller bins will bring an additional $25 million and a 10 cent TTC fare hike will net another $25 million.

The budget also contains a further $51 million in savings identified through a third-party audit of the city’s books.

Nonetheless, some councillors still say that the city needs to find ways to raise additional revenue to make up for years of “austerity budgeting.”

During Wednesday’s meeting Ward 4 Parkdale-High Park Coun. Gord Perks said that while he is “delighted” that Tory introduced a city building levy to fund needed priorities, at there needs to be a conversation going forward about additional revenue tools, including a municipal sales tax.

Ward 13 Toronto Centre Coun. Kristyn Wong-Tam also jumped into the debate about new revenue tools on Wednesday, moving a motion that calls on staff to report back on the feasbility of reviving the $60 vehicle registration tax that was scrapped by then Mayor Rob Ford in 2010.

She said the revenue raised by such a tax could go towards transit affordability and service improvements, enhanced winter road maintenance and Vision Zero road safety initiatives.

"We are almost 10 years from its cancellation and we have lost and said goodbye to $550 million. Think about what kind of services we could have invested in with those additional funds," she said.

In an 8-17 vote, council voted against the motion.

Tory has previously insisted on keeping tax increases to around the rate of inflation, however this budget does mark a departure from that ethos.

Ward 18 Willowdale Coun. John Filion said during Wednesday’s meeting that through the tax hike, the city building levy and a reduction in garbage rebates the city is "certainly going to the residential taxpayer for as much as we can" but still has an "urgent need" to find additional revenue sources to meet the needs of a growing city.

“While we are patting ourselves on the back we also need to not ignore the inconvenient truth that we are just are not bringing in enough revenue from all sources to cover our needs,” he said. “The state-of-good repair (backlog) is really the municipal equivalent of a deficit. We are not allowed to run a deficit so we just keep pushing expenditures off and off and get further into a hole in the same way you would with a deficit. At some point that it is going to cause us a big problem.”

While the budget is balanced, as required by law, it is done so based on $77 million in federal funding to cover the resettling of refugees that has not yet been promised to the city.

A similar accounting trick was also used to balance last year’s budget and the federal government did eventually accede to the city’s request for $45 million in funding.

Tory has previously said that if Ottawa doesn’t come to the table with that money this year, the city will have to dip into its $93 million in reserves.

“I have been talking to them about that and I have had lots of positive feedback. No checks yet but I am confident that they will understand that that the responsibility is not a one off deal that happened last year,” he said on Wednesday.