TORONTO -- On what was supposed to be the happiest day of Greg Hetherington's life, came the first sign that something might be wrong with his mother.

"One of our family members came up and said 'hey is everything ok with your mom' and we said 'yeah, why?' She said 'well she was repeating the same story to me,'" Hetherington said, reflecting on his wedding day.

"We thought that's strange, maybe she was just excited in the moment. We probably dismissed it for a few months after that saying that it doesn't seem like anything's out of line."

But medical tests later showed that his 59-year-old mother Lee had in fact developed early-onset Alzheimers.

"You know at first she was in a bit of denial, she said 'no I'm fine.' These tests came back and it was a lot of denial at first and you know at a certain point I think we were in denial too because you don't think that it could happen and at that point it didn't really seem like there was anything wrong."

For six years, Greg's father, a cellist with the Toronto Symphony Orchestra, took care of his mom at home. But two years ago, the family decided to move her in to The Village of Humber Heights, a long-term care home and retirement residence.

Since then she has lived on the same floor as Greg's 102-year-old grandmother, with family visiting both women on a regular basis.

However, Greg and his family have been unable to visit his mother and grandmother since the onset of the pandemic. Both have tested negative for COVID-19, though other residents and staff at the facility have contracted the virus.

With a donation from Biosteel, Greg recently dropped off some energy drinks and bars to the home, and realized he wanted to do something more for the frontline health-care workers who spend their days and nights looking after his mom and grandma.

"I feel like people who are not on the front lines just cannot relate to the stress, and the environment that they're in everyday. So to be able to go in and work in that environment, you just know you're going to be exposed to it and you hope you have the right protection and you've washed your hands enough and you haven't touched your face and everything that we hear about, but it just seems when you're there and you see it it's just that much more real." 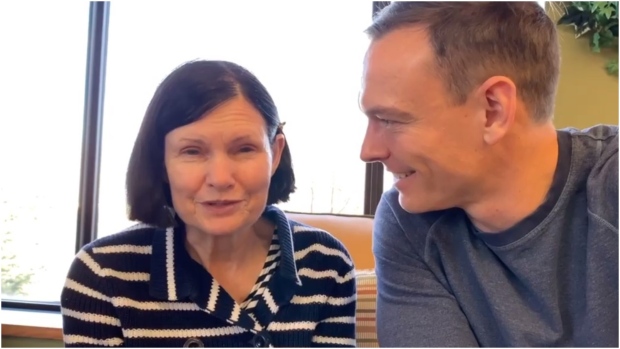 Speaking to CTV News Toronto from inside the Fuel Training Centre, his gym on Dundas Street West that he opened seven years ago to the day, the former CFL player says his business has been busy since the pandemic started—though not necessarily in a good way.

"It's been about adjusting how we normally conduct ourselves as a business which is usually an in-person, small group personal training class. But lately it's been exclusively online classes that we've been offering."

And that's where the idea to help staff at The Village of Humber Heights was born. Hetherington's goal: "Get awareness and raise some funds, because right now they're underpaid for what they're doing. Right now they're the lifeline of everything that's going on right now."

So on Mother's Day morning, Hetherington held a paid, online workout class, the proceeds of which will be donated to the staff at Humber Heights. At first he thought he might be able to raise $5,000, but that number quickly doubled.

My mother was diagnosed with early onset Alzheimer’s 8 years ago. The home where she now lives was struck hard by the coronavirus. Help me raise funds for the support team at @humberheights who have been on the front lines to save people like my mother. This Sunday, Mother’s Day, 10am join me for a virtual workout on Fuel Live at @fueltrainingclub , with your mom and all proceeds from those attending will go to a fund for the support team at The Village of Humber Heights #fuellive #humberstrong #alzheimers #alzheimersawareness @biosteelsports

During the class, which was held on Zoom, staff at Humber Heights held up a tablet so that Hetherington mother could see him during the workout and he amits he got emotional as he saw her too.

"I could see them, they were talking to her and they said 'there's your son,' and I see her lipping.. it's Greg? It's Greg? And I could see her smiling."

Hetherington says he raised more than $10,600 from the Mother's Day workout, and donations continue to pour in. He plans to give the money to staff to decide how best it can be spent to improve their lives. And while his mom may not know the gift he was giving others this Mother's Day, he says he knows his mom would be pleased that he was helping the people who help her.