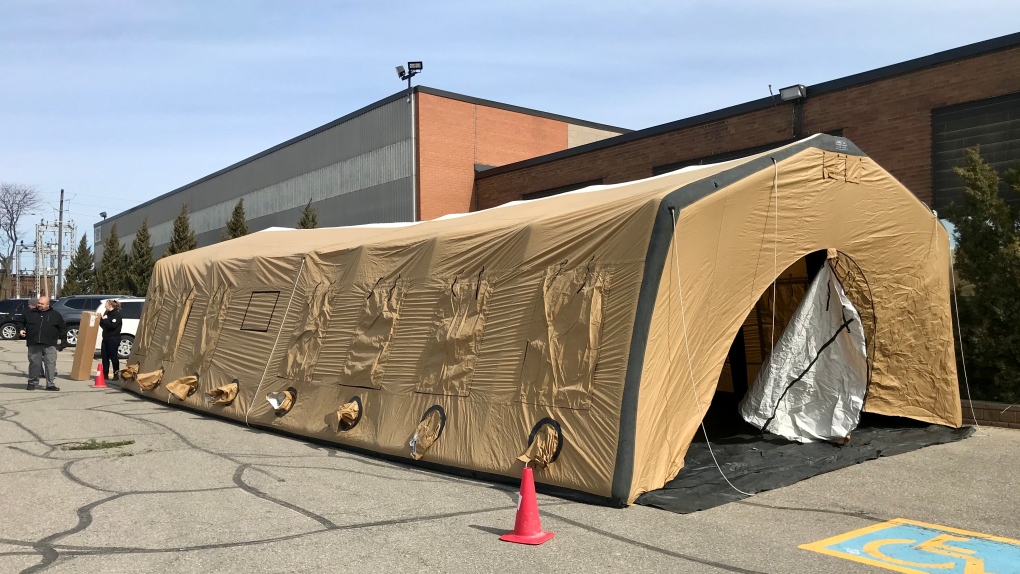 A tent is put up outside of the Daily Bread Food Bank on March 16, 2020. (Francis Gibbs/CTV News Toronto)

TORONTO -- The head of one of the city’s largest food bank organizations is raising concerns about a “worrisome” rise in demand during the COVID-19 pandemic.

Daily Bread Food Bank CEO Neil Heatherington tells CP24 that there has been a 53 per cent increase visitors to the organization’s central warehouse on New Toronto Street in Etobicoke over the last month, a trend that he says has also been felt at smaller facilities “right across the city.”

He said that complicating things further is the fact that food banks can no longer have the same numbers of volunteers on hand to sort and distribute food due to concerns over the spread of COVID-19.

For example, he said that Daily Bread Food Bank would typically have hundreds of volunteers sorting food over the Easter weekend but will have to forgo that tradition this year as they “scale back the number of people allowed in the building and adjust to a new normal.”

“It has been a difficult time. Our supply has come down because the needs have increased,” he said, “Obviously it is a worrisome trend.”

Heatherington said that those facilities will help address the rising level of demand, especially in light of reports of some existing food banks shutting down during the pandemic.

He said that there is, however, an increased need for donations to keep the shoves at those facilities and other existing food banks stocked during a time of real need.

“This weekend we are very hopeful that as individuals buy food for their Passover or Easter dinners that they would buy extra and drop it off at any of the fire halls or go online to any one of the grocery retailers and have the food sent here directly here,” he said. “We will make sure it goes directly to someone experiencing poverty.”