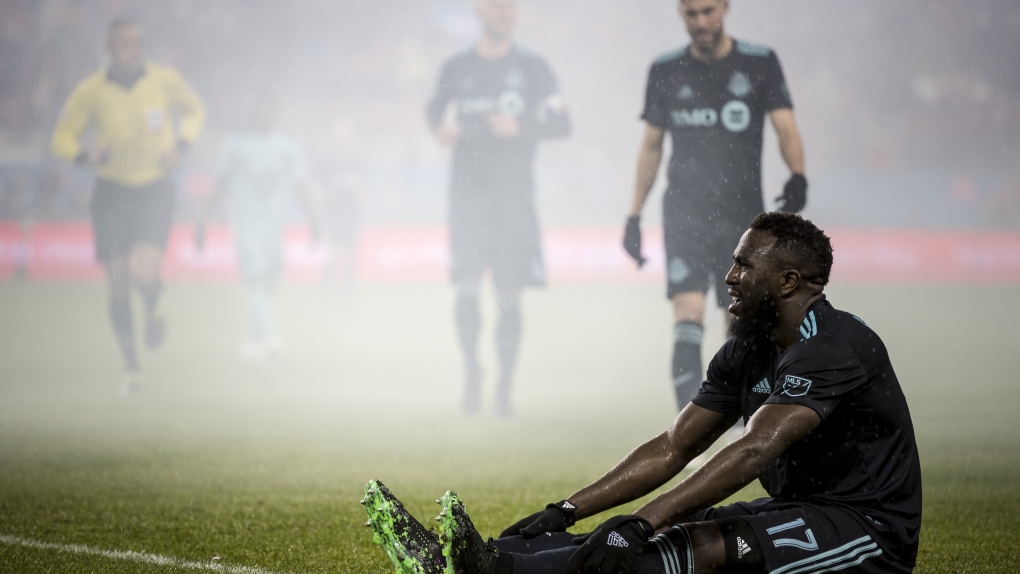 Toronto FC forward Jozy Altidore (17) recovers on the ground after being tackled during second half MLS soccer action against the Minnesota United in Toronto on Friday, April 19, 2019. (THE CANADIAN PRESS/Christopher Katsarov)

Toronto FC ends a stretch of five games in 15 days Saturday when it faces Real Salt Lake City at Rio Tinto Stadium with the hope that key forward Jozy Altidore could see some action.

The U.S. international's finishing touch was sorely missed Wednesday when Toronto launched a club-record 35 shots (13 of which were on target) but had to settle for a 0-0 tie with D.C. United, who had three shots (two on target).

After scoring 18 goals in its first six games (4-1-1), Toronto has scored just four in the last five (1-3-1) and been shut out twice. Altidore has played just 18 minutes in those five games, due to hamstring and heel problems.

Altidore, who has been dynamite when healthy this season with five goals in six games, was a question-mark after the D.C. United game.

"I'm not sure if we know exactly how quickly we can get the inflammation or the soreness out of (the heel)," coach Greg Vanney said at the time.

But Altidore trained in Utah on Friday, raising hopes he will see some playing time Saturday. Toronto will be without injured defenders Chris Mavinga (quad) and Laurent Ciman (ankle).

The questions will continue to mount about the Toronto attack past Altidore. Ayo Akinola has left to join the U.S. team for the FIFA U-20 World Cup, leaving Jordan Hamilton and Terrence Boyd as the other attacking options.

Vanney pulled no punches when asked after the midweek game if the team was lacking in firepower without Altidore.

"I think we need more," said Vanney. "I think that's been evident for a while. That's something we definitely have to consider and have talked about. We've got to work on that."

Toronto GM Ali Curtis put in a lot of miles on the road prior to the transfer window closing May 7. He says the team identified two players it wanted but could not swing the deals.

Without the reinforcements, Curtis essentially has to wait until the secondary transfer window opens July 7 and sound positive.

"I think we're in a position of strength."

Curtis noted how quickly Spanish playmaker Alejandro Pozuelo -- who has five goals and six assists in nine games -- had bedded in with the team, suggesting that a refined search produces dividends.

Goalkeeper Quentin Westberg and wingback Richie Laryea have proved useful additions to the squad. Toronto is also looking to promote players from within its system.

But expect additions come June, which will be timely given Altidore is expected to leave for the Gold Cup which starts June 15.

Given the investment in the possible targets, "we just need to be careful and patient and disciplined about what individual we're actually going to bring in."

"Yes, we did identify a few players that we thought would fit the profile, for sure. But their clubs weren't willing to let them go. Unfortunately. It wasn't a matter of cost or for lack of effort or skill. I think at the end of the day the teams just didn't want to let them go."

In the meantime, TFC may want to invest in some cotton wool for Altidore.

ON THE MOVE: Reports suggest Salt Lake's Ecuador forward Joao Plata, who spent two seasons with Toronto, may be on the move to a club in Mexico.

HISTORY SAYS: Tough day for Toronto, which is 1-7-1 in Salt Lake.