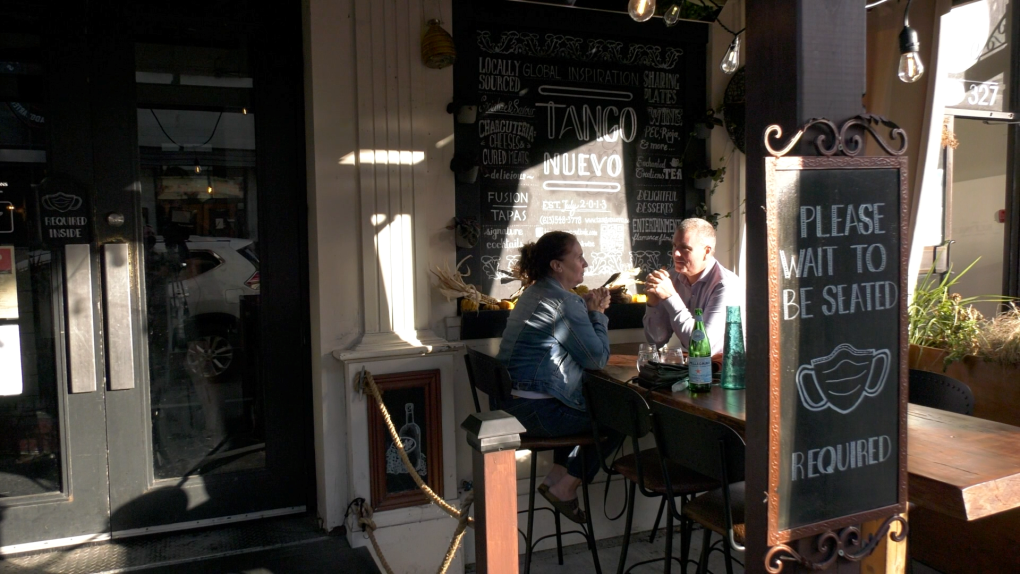 TORONTO -- Torontonians will be able to continue dining on expanded patios and curbside cafes through the winter, but only those that are near public parks or on private property.

On Tuesday, Toronto City Council unanimously approved a motion that would partially extend their CafeTO patio program through April, but with some modifications to allow for safe snow removal throughout the winter

“Winter is coming and we need to support restaurants by allowing winter cafes right now,” Toronto Mayor John Tory said in a statement issued late Tuesday night. “Sidewalk cafes and expanded private patio space are just a few ways we will support restaurants this winter and into the spring.

Restaurants and cafes with extended patios adjacent to, or located in park spaces with hard surfaces will be able to continue to offer services until April 14, 2020, according to the motion approved by council. Fees and charges to take part in the program will be waived.

The city will also be asking the provincial government to develop new measures to extend the outdoor service of alcohol.

Toronto restaurants have been hit hard by the COVID-19 pandemic. Indoor dining was shuttered for months during the first wave of the disease. After reopening indoor dining spaces for much of the summer, the province has shut them down again in an effort to flatten the curve of the second wave.

Earlier this month, Toronto and three other regions were reverted to a modified Stage 2 of the province’s economic reopening plan. For restaurants, this means that while they can provide takeout and patio service, they cannot offer dining indoors.

Some restaurants around the city have already started to winterize their patios and Tory said the city will work with businesses to expedite requests for tents and heaters.

“(It’s) just to give restaurateurs the opportunity when they are so hard hit to offer people a place to go and it will be heated,” Tory told CP24 last week.

“It won't be exactly like room temperature necessarily but I think a lot of people in the right places at the right times might take advantage of it and help their restaurants and bars at the same time.”

Temporary tents and other structures are only allowed on private patios, assuming they adhere to public health guidelines.

The city is also expected to discuss a motion on Wednesday that would ask the province to put a cap on commission for delivery services, noting that some restaurants are struggling to pay up to 30 per cent in commission to some companies.

Toronto does not have the municipal authority to mandate lower commission for food delivery services.

Ontario's COVID-19 cases in schools, child-care centres as of Nov. 25