TORONTO -- A Toronto father has been forced to dismantle and move a pirate ship he built for his two children after a neighbour anonymously complained to the city.

John Konstantinidis spent eight weeks building the structure in the backyard of his Scarborough home so that his children, aged nine and seven, would have somewhere to play while many activities are off limits in the city due to the COVID-19 pandemic.

"They love it more than anything in the world," Konstantinidis told CTV News Toronto on Thursday.

But about a week after the structure, which is part deck and part swimming pool, was finally complete, Konstantinidis was contacted by the City of Toronto notifying him that the structure was in violation of city bylaws. 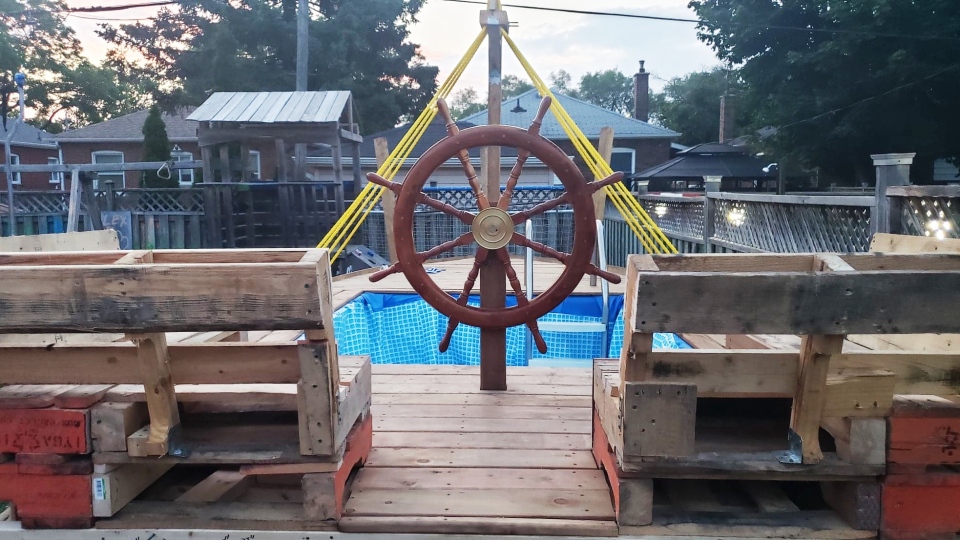 In a statement to CTV News Toronto, the city said they received a "complaint regarding a large structure with a pool, close to the property line."

"A pool such as this one requires a pool permit which ensures the pool is properly fenced in," the city said, adding that "in addition, the structure itself is larger than 10 x 10, and therefore requires a building permit."

The city said Konstantinidis has been advised to move the pirate ship five feet away from the fence to comply with "zoning setback requirements for pools."

He said he has now begun the lengthy process of dismantling the structure so he can move it further away from his fence.

He says he's willing to comply with any rules necessary so that he doesn’t have to remove it completely.

"We are not above the law," Konstantinidis said. "But don't make me take it down."

Konstantinidis and his wife, Voula, said they wish the person who filed the complaint had spoken to them first because dismantling the structure has "really hurt" their children.

"They don't understand why our neighbours are being like that," Voula said. "What do you say to them as a parent?"

"You try to put their mind at ease. We told them no matter what they will have some sort of pool."