TORONTO -- It’s been a busy six months for a group of Toronto cyclists known as the ‘Bike Brigade,’ who have been volunteering their time to help people in need.

“Cyclists have flocked to the Bike Brigade, and that comes as no surprise,” says Dave Shellnutt, organizer of the group and self-described ‘Biking Lawyer.’ “We’re just really involved citizens so I knew that they could be counted on and that has been proven true time and time again.”

The Bike Brigade is made up of more than 500 registered volunteers who deliver food, medicine and other supplies by bicycle to organizations and individuals around the city. Every Tuesday, about 60 of them gather to make deliveries of produce boxes from the non-profit organization FoodShare.

“Tuesday has turned into my new Friday night,” Shellnutt tells CTV News Toronto. “Seeing 60+ cyclists coming up here, grabbing boxes and darting off into the night to help folks out is like a weekend!”

The Bike Brigade was created in the early weeks of the pandemic when Shellnutt recognized that people would be isolating or in quarantine and unable to shop for themselves.

“Knowing I had a connection to a ton of cyclists in the city, I thought hey, why not mobilize these people to get supplies to folks in need,” he explains.

The volunteers who are a part of the Bike Brigade say they’re happy to be helping where they can.

“It’s amazing to be out there to help out with this initiative to get people food that’s needed the most,” says volunteer Chloe Silver. “And to be able to do that in an eco-friendly way on a bicycle is really awesome.”

“It means a lot to me personally to be part of a community during a time where a lot of us feel helpless, alone and many of us are unemployed or under employed,” adds Rachel Wang, another volunteer.

“It’s a great time to volunteer. Everyone needs a little bit of help right now,” says Eugene Lu about choosing to join the Bike Brigade. “That’s why I did it. And I love cycling!”

The deliveries are made on behalf of front-line organizations and food banks in Toronto’s downtown.

“Through that partnership we’ve been able to deliver 860,000 pounds of produce across the city of Toronto. So that’s almost 54,000 emergency good food boxes,” says Paul Taylor, Executive Director of FoodShare Toronto. “If it wasn’t for groups like the Bike Brigade, none of this would have been possible.”

“Our main role is supporting the many community organizations in Toronto that are doing such heavy lifting,” Shellnutt says.

Organizers of the Bike Brigade say they’ll keep offering their services through the upcoming months, so long as there is need. They add that they are always looking for more cyclists to join the cause, as well.

“Cyclists are a really strong force in our community in Toronto,” adds Shellnutt. “We just want to thank those community organizations. We’re here to support you.”

You can find out more about the Bike Brigade here. 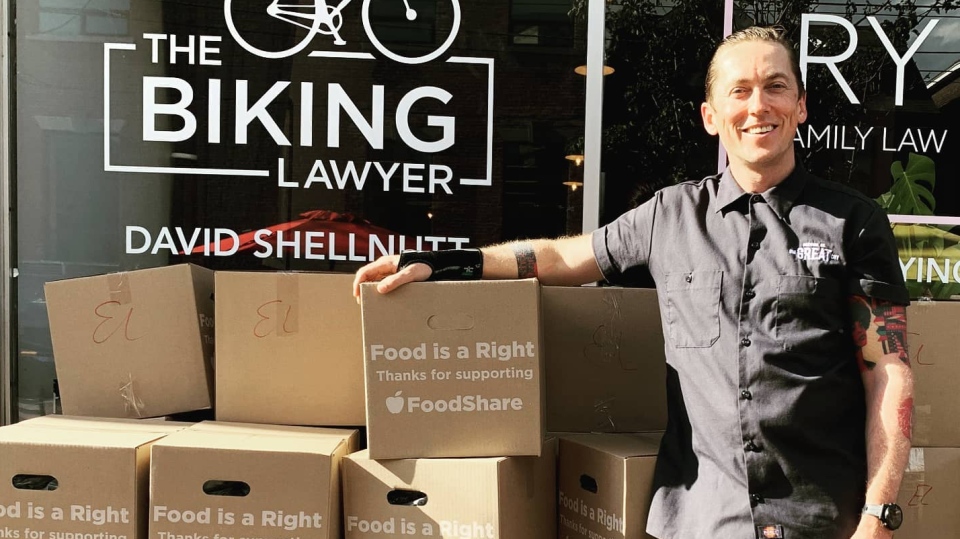