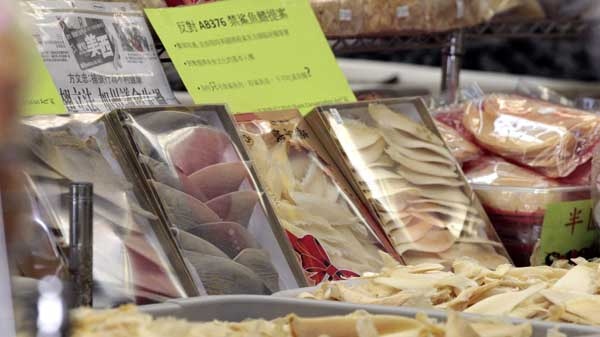 Packages of dried shark fin products are shown in a store in Chinatown in San Francisco, Calif., Thursday, May 5, 2011. (THE ASSOCIATED PRESS / Jeff Chiu)

A pair of Toronto city councillors will propose a city-wide ban of the possession, sale and consumption of shark fin at a press conference on Monday.

Councillors Glenn De Baeremaeker and Kristyn Wong-Tam are aiming to gather support from Toronto residents with a campaign called "Celebrate Sharks Summer Tour." The campaign intends to create a petition with 10,000 signatures.

The councillors will be joined by Rob Steward, the award-winning documentary filmmaker of "Sharkwater," and Rob Sinclair, the executive director of WildAid Canada.

The proposal to ban the product comes a few weeks after Brantford, Ont., became the first city to ban the sale of shark fin in Canada.

Popularly consumed in the Chinese food delicacy shark fin soup, the product has come under criticism in recent years due to the harvesting process of the sharks.

"Shark finning is a wasteful, inhumane practice that involves cutting off a shark's fins and then tossing the still-live shark back overboard to drown, bleed to death, or be eaten alive by other animals," the Toronto councillors said in statement released on the weekend.

Former Brantford MPP Phil Gillies, who helped spearhead the ban in Brantford, said the process of shark finning is a "brutal method of capture."

Gillies said that with harvest rates of sharks hitting about 75 to 80 million per year, some species could be extinct within 12 to 15 years.

Shark fin soup increased in popularity in the 18th and 19th centuries when standards of living improved in China. It's usually enjoyed at special occasions such as weddings, and not serving it could be seen as a sign of disrespect to guests.

The current harvest process of "shark finning" occurs because fishermen don't feel it's economical to deal with the whole carcass, according to Gillies.

He said the process has been illegal in Canadian waters since 1993, but continues in unregulated markets such as Costa Rica.

"The only way only way to protect the sharks is to eliminate the demand for the product," he said.

Gillies acknowledged that attitudes toward the dish are changing in North America, but he said more education into the harvesting practices is needed.

He said that WildAid is creating plans to implement campaigns to further educate consumers on the subject.