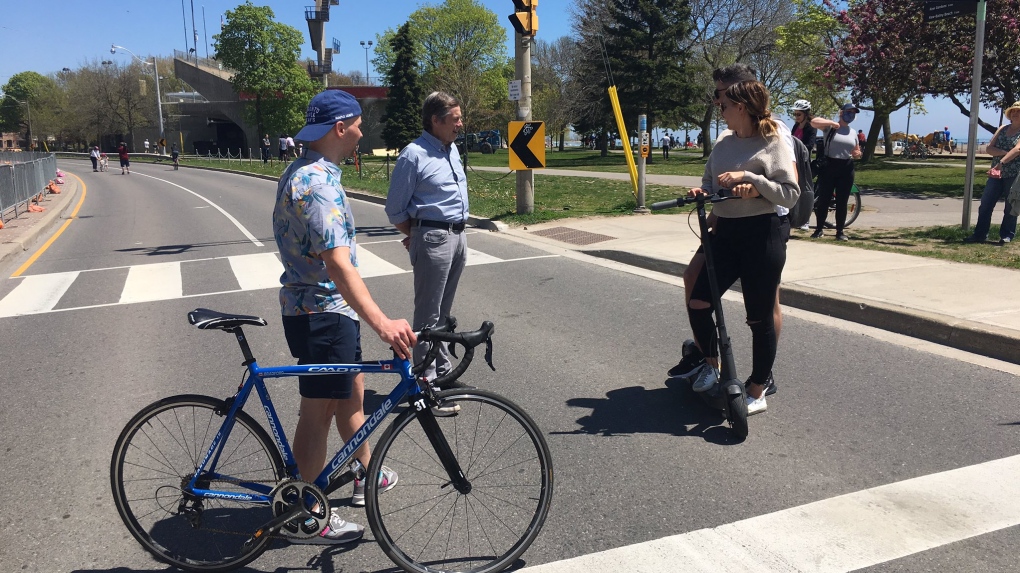 Mayor John Tory and Coun. Brad Bradford speak with some of the people taking advantage of the ActiveTO closure along Lake Shore Boulevard East on Saturday. (Twitter/@JohnTory)

TORONTO -- Toronto’s ActiveTO program could be expanding to other neighbourhoods this spring to provide more space for people to safely enjoy the outdoors amid the COVID-19 pandemic.

The initiative launched last May and closed major roads in the city’s core to provide pedestrians and cyclists more space to physically distance to reduce the spread of the novel coronavirus.

ActiveTO closures happened along Lake Shore Boulevard and Bayview Avenue from May to October.

Mayor John Tory said he hopes ActiveTO will be scaled up and expanded to more areas of the city this year after a successful rollout last year.

“I think if anything my objective would be to scale it up. By saying that, I'm talking about what I've asked of the staff which is that they look at opportunities to have an ActiveTO corridor, if I can call it that, in other parts of the city,” Tory said to reporters on Wednesday.

“We had it downtown last year. It was a huge success and it drew people from all over the city and so there's no reason why we can't at least look at a place we can do it in East York, North York and Scarborough if the local people want it,” he added.

The program also expanded to include Yonge Street for two Sundays in September.

City data showed that the most popular ActiveTO location was along Lake Shore Boulevard West where an average of 18,000 cyclists and 4,000 pedestrians used the space each weekend last summer.

Tory noted that one hurdle city staff will have to consider when preparing ActiveTO for this summer is the amount of construction happening in the city.

“The other thing that we had to take account of was very significant construction occurring in particular in the west end of the downtown of the city, and how that would affect Lake Shore West in particular. So we're examining that from the standpoint of whether it means Lake Shore West can be used at all, which I don't think would be the case, or maybe would be able to be used at some times and not others,” he said.

Tory said city staff are expected to release a report soon on ActiveTO guidelines this year.