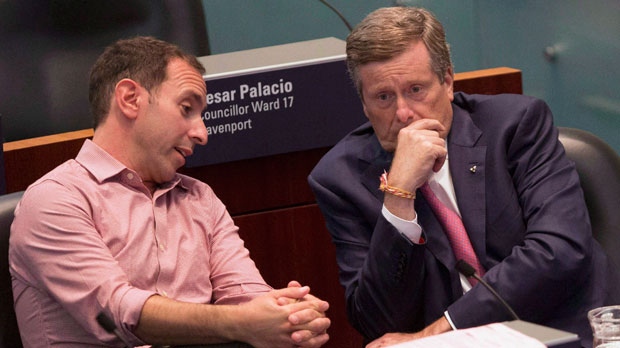 TORONTO -- Evictions are suspended in Ontario due to the COVID-19 pandemic but one Toronto city councillor thinks that Premier Doug Ford needs to take it further and immediately ban eviction notices as well.

Toronto-St. Paul’s Coun. Josh Matlow made the comment o CP24 Wednesday morning as rent came due for the vast majority of the city’s tenants amid calls for landlords to show flexibility.

“Premier Ford did something that I think all of us should applaud early on in this crisis when he froze eviction orders but what he didn’t do was ban eviction notices and while the orders have been suspended there are still tenants who are going to be receiving eviction notices and, without understanding what they are, some of them will infer that that means that they need to get out,” Matlow said.

“The other issue is that this delays their crisis until perhaps after this emergency where eviction orders might come from these notices. So they are living under that threat every single day.”

Ford has previously said that any tenant who is dealing with lost income as a result of COVID-19 and is “just in an absolute crisis” doesn’t have to pay rent and will be protected by his government.

It’s rent day. My message to Ontario’s tenants and landlords about what the provincial government needs to do now to really ensure that we all get through this together. pic.twitter.com/bZyCoVgUrY

Ford, however, has not introduced any direct support for renters at this time such as the $500 monthly rent supplement announced by British Columbia’s provincial government.

Matlow said that in addition to banning eviction notices, he would like to see the Ford government introduce a program for landlords so they can in turn waive rent payments for tenants who might suddenly find themselves jobless as a result of the pandemic.

The eligibility for such a program, he said, could be based on qualifying for federal income supports.

“We are all asking tenants to remain in their homes and I believe the provincial government has a responsibility to make that affordable and possible for tenants while they may be out of a job and they may not be able to make their rent right now. That has happened to thousands of people,” he said.

“So what I am asking the provincial government to do is to consider a plan that is reliable, understandable and immediate to ensure the tenants who legitimately cannot make their rent can be forgiven but also so that landlords, especially small and medium-sized ones who are also going through a financial crisis, get a reasonable offset like what] has happened in British Columbia.”

In an earlier interview with CP24, Mayor John Tory said that he would be supportive of any program that would “backstop” landlords so they can accommodate tenants.

He said that the city has done all it can by agreeing to defer commercial and residential property tax payments until June 1 and is hopeful that those savings can be passed on to tenants as well.

“I know landlords are in business too and have their own obligations but this is an emergency and we need everyone to kind of cooperate so that we can preserve as many of these businesses as possible,” Tory said, speaking specifically about shuttered restaurants, bars and stores.