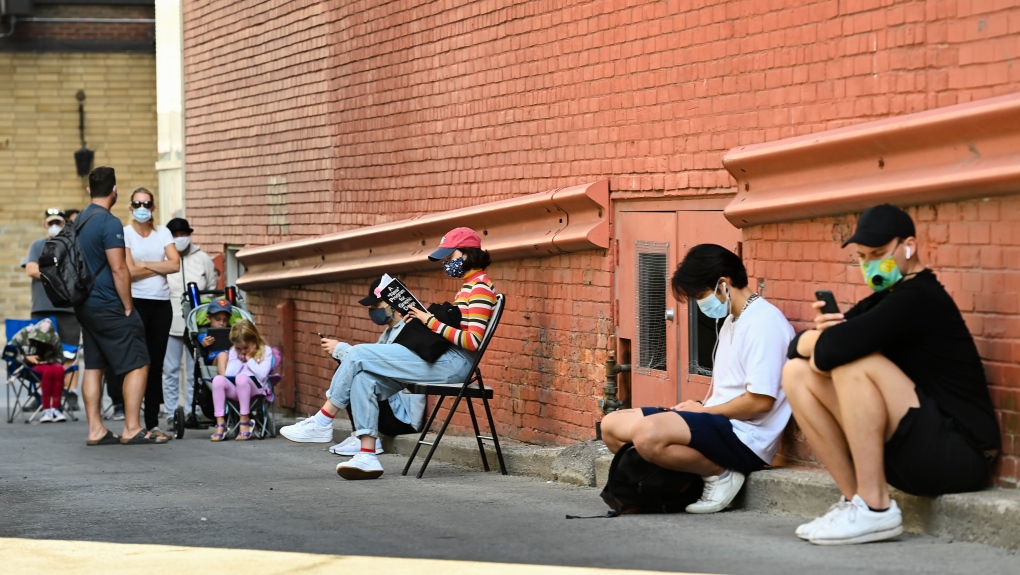 People sit in an alleyway for hours at a COVID assessment centre at St. Michael's Hospital during the COVID-19 pandemic in Toronto on Monday, September 28, 2020. THE CANADIAN PRESS/Nathan Denette

TORONTO -- Toronto Public Health is now reviewing anonymous cell phone data as part of a wider effort to understand why COVID-19 transmission seems to vary so considerably from neighbourhood to neighbourhood.

In a report that will be considered by the Board of Health next week, Toronto’s Medical Officer of Health Dr. Eileen de Villa says that “retrospective summaries” of cell phone data obtained by her office have shown that individuals living in the hard-hit northwest corner of the city “continued to move about at approximately the same rate throughout the pandemic” while individuals in more affluent areas with lower case counts “were more likely to stay at home.”

She said one explanation for the difference might be that individuals in lower income communities like the northwest are more likely to serve as “essential workers” who don’t have the option of working from home.

That, in turn, puts them at higher risk of contracting COVID-19, she said.

In fact, the rate of infection in the city’s hardest-hit neighbourhood of West Humber-Clairville is nearly 10 times that of the Beaches, which has the lowest number of cases per 100,000 people in Toronto (204).

In a statement provided to CP24.com, Associate Medical Officer of Health Dr. Vinita Dubey said that the cell phone data is still being reviewed by Toronto Public Health and staff have not yet had the opportunity to look for patterns of movement in other neighbourhoods, where there is also increased transmission.

For that reason, she said that the data will not be released publicly at this time.

“Data about mobility patterns is just one data set of many that informs TPH's response to COVID-19, including strategies to assist vulnerable communities,” she said. “It also provides further insight on the risks of exposures, and activities of communities that have been disproportionately impacted by COVID-19.”

In her statement, Dubey noted that Toronto Public Health is “actively working with other city divisions and partner organizations to reduce inequities in how COVID-19 infection is affecting the population” with the review of cell phone data representing just one aspect of that work.