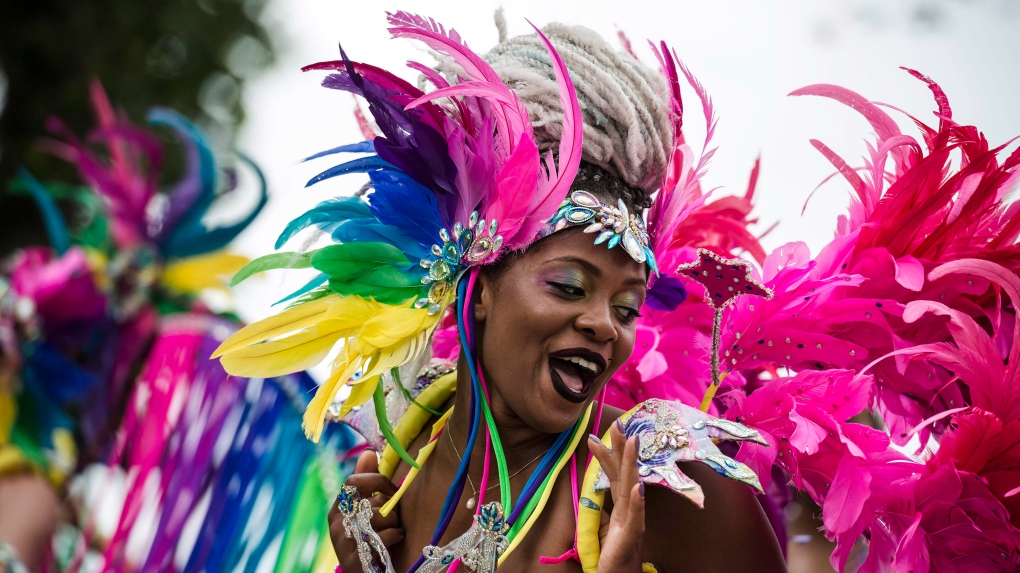 A parade participant performs during the Grand Parade at the Caribbean Carnival in Toronto on Saturday, Aug. 5, 2017. (THE CANADIAN PRESS/Christopher Katsarov)

A small group of topless women will be taking part in the Toronto Caribbean Carnival's parade this weekend in an effort to send a message about body positivity.

Yvonne Stanley, a photographer working on a body positivity project, said she approached organizers with a proposal for topless masqueraders because she wanted to spark a conversation about desexualizing women's bodies.

The idea was well received, she said, and will result in four topless performers in the colourful parade when it hits the streets of Toronto on Saturday.

Stanley said she isn't worried about potential backlash to the performers -- who will have airbrush paint and jewels on their chests -- since the parade routinely features participants wearing revealing clothing. She added that the topless performers will be accompanied by security during the parade.

She said she'll be filming the women for her project, The Boob Book, which aims to empower women and was sparked by her own relationship with her body.

"I went through the same things that many women went through like stuffing their bra ... through that entire process I continually hated my breasts," Stanley said. "I just needed to see myself represented. I thought lack of representation can really cause a lot of trauma ... So I decided to start those conversations."

One of the women who will be topless in the parade said she was looking forward to her role in the event.

"Men can walk out with no shirt on, and their excuse is it's really hot outside. Nobody is shaming them, they're not looked at as sexual beings," said Ariam Eqbe. "For women it's quite the opposite."

Eqbe said the prospect of going topless at the parade has made her feel "powerful."

"I feel more in control. I feel liberated, I feel I am embracing and loving myself, and it's something that is my decision," she said.

The managing director of Venom Carnival, a parade band sponsoring the participation of the topless women, said he was happy to support the cause.

"People should feel comfortable with their bodies," said Aneil Persad. "Regardless of what you look like, it's all about having a good time and embracing yourself."

In 1996, Ontario's top court ruled that a woman's topless stroll down a street in Guelph, Ont., was not obscene, making it legal for all women in the province to be topless in public.