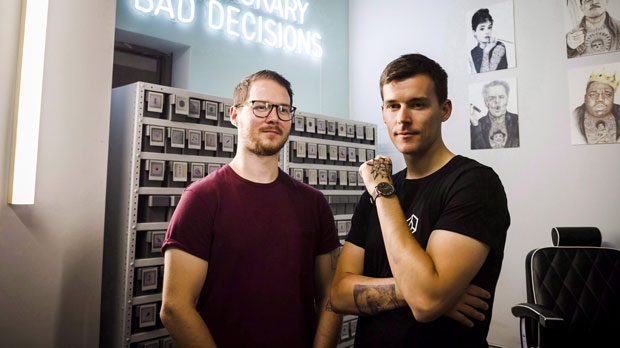 Braden, left, and Tyler Handley, co-founders of Inkbox, a semi-permanent tattoo company based in Toronto, pose for a photograph on Monday, July 23, 2018. (THE CANADIAN PRESS/Christopher Katsarov)

TORONTO -- When most "Stranger Things" fans watch the smash hit Netflix show, they look out for plot twists that give them the heebie-jeebies, but when Tyler Handley catches the science fiction program he's usually focused on something even more unusual: the 011 tattoo emblazoned on star Millie Bobby Brown's forearm.

The show used products from Toronto-based semi-permanent tattoo company Inkbox, owned by Tyler and his brother Braden, to create the thin block numerals.

The prominence of their ink on that hit show is just one sign of the meteoric rise the Handleys have experienced since they started the company, which sells temporary art that is more durable and realistic than the stick-on varieties, in a basement workshop at Ryerson University's Fashion Zone incubator in February 2015.

Inkbox has since sold more than 500,000 tattoos, opened a flagship store and tattoo parlour in Toronto's Entertainment District, become a favourite of "The View" moderator Whoopi Goldberg and cropped up in the Oscar-nominated film "The Greatest Showman" and American crime drama show "Blindspot."

But the Inkbox founders say they don't recall a definitive marketing move that suddenly catapulted the company to fame.

Inkbox didn't court entertainment brands ("there really isn't a lot of money for tattoos in movies") and only discovered the company's products were on-screen when they were approached by makeup artists to the stars asking how to best apply the tattoos, Tyler said.

Instead, he attributes Inkbox's popularity to being one of the only North American companies toying with semi-permanent tattoos that aren't henna and sink farther into your skin than stick-on varieties, allowing Inkbox to profit from being first-to-market. The company also incorporates slick branding on social media that promotes their products as a "temporary bad decision." Early investments from "Survivor"'s Jeff Probst and "The Biggest Loser" host Alison Sweeney also helped.

"You get a lot of people who congratulate you, who say 'oh my god' you have made it, but you never feel that way because you are always looking to who you have to become," said Tyler.

Inkbox sells bottles of ink that can be used to freehand tattoos as well as pre-made tattoos that are applied like the children's stick-on kind and come in a variety of designs from classic butterflies and anchors to custom pieces crafted by designers who get a cut of sales.

Inkbox tattoos take roughly 15 minutes to apply because they let the ink sink into the top layer of your skin, where it changes the skin's colour when it reacts with organic compounds derived from the Genipa Americana plant sourced in South America.

The tattoos reach their deepest colour a few days after application and can appear in more of a navy blue shade on people with lighter skin tones. All Inkbox tattoos last for between eight and 18 days and fade naturally over time.

The idea for Inkbox first arose when Tyler and Braden were kids. They both wanted to get tattoos, but feared whatever designs they chose would eventually age them.

"I didn't want to be that guy that had that tribal tattoo or something... that was cool back then but maybe not so much now," Tyler said.

"We wanted a tattoo we could wear in the meantime and temporary tattoos just didn't cut it for us and it blew our minds that with something as ubiquitous amongst millennials as tattoos are there wasn't a middle-ground option."

So the brothers created one, working from two tables in a little corner of the Fashion Zone. They spent their first year in business mostly working on product development, cosmetic testing and sourcing the Genipa Americana plant, but Tyler said business was "very quick to ramp up" when the brothers started selling to the public.

They soon took over half the Fashion Zone's space and were eventually kicked out because their company was growing so big, so fast.

It wasn't just people with a yearning for tattoos and a fear of needles who wanted their product. Those who want to test out designs before they get them permanently inked on their skin, looking to cover up scarring and temporarily mark a difficult time in their life all flocked to the brand quickly.

Tyler admits there are some people heavily-entrenched in tattoo culture that aren't big fans because they view the medium as more than a conveyor of art.

He believes their target demographic is between 18 and 30, but added the brand often lands buyers between age 45 and 65, who feel they are past their prime tattoo years and not cool enough to visit a tattoo parlour, or others who want some art on their skin on vacation.

But he is most excited about potential for Generation Z, those below age 17, who are "not as permanent in their ideas" and are hard to attract online, but can be targeted with bricks-and-mortar shops.

And unlike most tattoos, these ones get the parental stamp of approval.

"Moms and dads love us," said Tyler, who has found many parents who don't want their "cherished" children to "destroy" their bodies with permanent tattoos, but will let their children get Inkbox tattoos because they wear off.

"Our parents thought we were crazy when we started Inkbox. They were like 'no one is going to want this, what is this?', but once we started showing them the sales and our social accounts started growing exponentially, it changed their opinion."