The Toronto-bound lanes of a major Ontario highway have been reopened following a crash that claimed the lives of two men.

The crash occurred at approximately 9:20 p.m. on Tuesday, on the eastbound lanes of the Queen Elizabeth Way near Trafalgar Road. Provincial police said four vehicles were involved in the crash, including a transport truck and a flatbed truck.

OPP Sgt. Kerry Schmidt said a car and the transport collided, then an SUV and the flatbed truck struck the rear of the transport. The SUV was wedged into the back of the truck, and a spark set fire to a quantity of diesel fuel that spilled during the crash. The vehicles were “unrecognizable” after the accident, Schmidt said.

“When you have a fire or when you have a vehicle that is crushed between two transport trucks, it is unbelievably horrific in terms of the carnage,” he said.

The fire engulfed the vehicles, and two men inside the SUV were killed.

Police say they have identified the victims and have notified the families.

“Fatalities are tragic anytime, but here we are just leading up to Christmas,” Schmidt said. “Gifts have been bought, plans have been made and there are two people now who will not be making it for Christmas dinner.”

Officers are still investigating the cause of the crash.

The eastbound lanes of the QEW were closed at Trafalgar Road, but reopened at approximately 3 p.m. on Wednesday.

With a report from CTV Toronto’s Austin Delaney 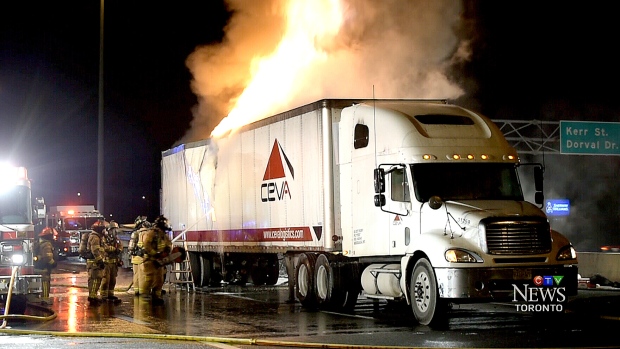 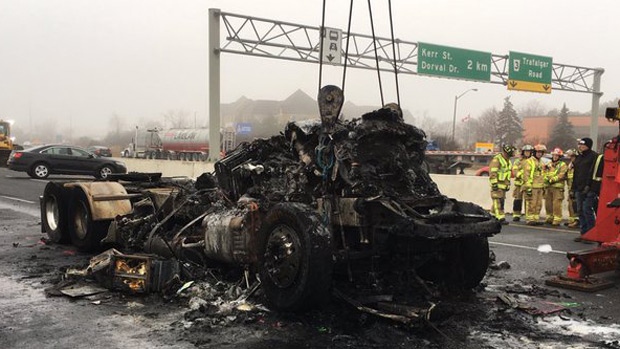