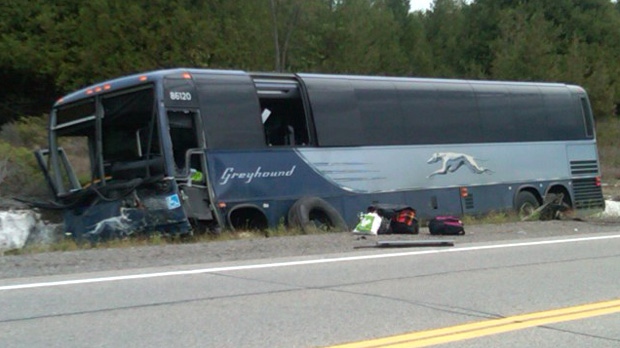 One person is dead after a crash involving this Greyhound bus on Highway 7 just west of Carleton Place Friday, Sept. 7, 2012.

One person is dead after a fatal crash involving a Toronto-bound Greyhound bus south-west of Ottawa on Friday, police say.

The coach bus collided head-on with an eastbound Volkswagon Jetta at approximately 10:15 a.m. on Highway 7 between Innisville and Carleton Place.

According to Lanark County Ontario Provincial Police, the driver of the sedan was pronounced dead at the scene. No other life-threatening injuries were reported.

Some of the 49 bus passengers received minor injuries and were transported to Carleton Place Community Centre.

“It is extremely fortunate that people on that bus did not sustain any more serious injuries,” said Const. David Blair in an interview with CTVNews.ca on Friday.

CTV Winnipeg’s Karen Rocznik was on the bus, headed from Ottawa to Toronto, when the crash happened.

“All of the sudden we heard a loud crash and the bus veered to the side of the highway,” said Rocznik. “Everybody managed to get off the bus OK, we were all fine.”

Rocznik also sent out of a tweet saying everyone on board was okay.

A replacement bus arrived soon after to continue the trip to Toronto.