Toronto Blue Jays head to playoffs Friday. Here’s what you need to know

Toronto Blue Jays head to playoffs Friday. Here’s what you need to know 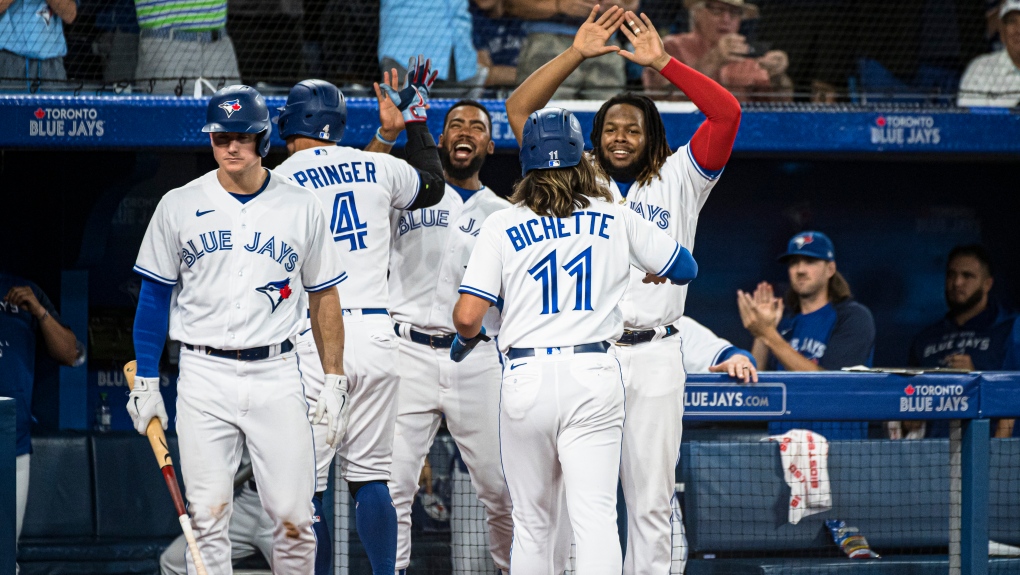 Toronto Blue Jays players are shown in this file photo. The Blue Jays clinched a playoff berth in the 2022 MLB playoffs on Sept. 29, 2022, following a Baltimore Orioles loss.

Last week, the Toronto Blue Jays clinched their first playoff berth since 2020. Tonight, they can clinch home-field-advantage for their wild-card series, bringing post-season baseball back to the Rogers Centre for the first time since 2016.

The Jays are in Baltimore tonight, kicking off their season-ending three game series with the Orioles, while the Seattle Mariners, whom the Jays will likely face in the wild-card round, host Detroit.

The Mariners (87-71) hold the tiebreaker over the Jays (90-69), so Toronto must finish at least one game up on them in the standings to ensure home-field-advantage.

That means any combination of Jays wins and Mariners losses that add up to two will clinch home-field-advantage for Toronto.

The Tampa Bay Rays are the third team in the AL wild-card hunt, but they can’t catch the Jays, they can only surpass the Mariners, whom they hold the tiebreaker over.

The lower seeded of the two will face the Cleveland Guardians in the other AL wild-card series.

Home-field-advantage is crucial for the wild-card round, as every game in the best-of-three series is played at the higher seed’s home ball park.

Jays manager John Schneider spoke with reporters Saturday and hinted that ace pitcher Alek Manoah would pitch in game one of the series.

Manoah was just named the AL pitcher of the month for September after posting the lowest single-month ERA in team history.

Manoah, 24, told CP24 earlier today that it’s amazing for him to have one of the best seats in the house to watch this Jays team every night.

“I’m just a kid living out my dream,” he said. “I’m a huge baseball fan. I love the game and I love our team.”

Home-field or not, if the Jays can advance past the first-round, they’ll meet the American League’s top-seeded Houston Astros in the ALDS.

Game times for the Jays’ wild-card series won’t be announced until the matchups are officially determined, but Toronto will be playing their first game sometime Friday afternoon, along with the first games of the three other MLB wild-card series.

The Mariners start their four-game series with the Tigers at 9:40 p.m. tonight, while the Jays and Orioles face-off at 7:00 p.m.

The federal government is looking at potentially helping to secure the release of 19 Canadian women and children being held in northeastern Syria, a recently filed court document says.