TORONTO -- A CFL player facing accusations connected to a homophobic attack on Toronto Island this past weekend is staying silent for now.

Social media allegations are swirling that one of the people involved was Redblacks defensive linemen Chris Larsen, who has now been suspended by the team. CTV News Toronto has requested comment from Larsen directly.

“As this is officially a police matter, neither the player nor the organization can speak to it further,” said Chris Hofley, communications manager with Ottawa Sports and Entertainment Group in an email to CTV News Toronto Thursday.

Images shared with CTV News Toronto show some of the injuries suffered by David Gomez, 24. He has bandages on his face and back. Friend Cianan Liburd said he had surgery for both.

“I’m in a lot of pain. I’m scared to leave my home,” Gomez said, speaking with CTV News Toronto. “It’s been several days since. I only go to and from the hospital now.”

Gomez said he’s now using a cane and has night terrors, but the community has been ‘super supportive’ and that part has been really nice. 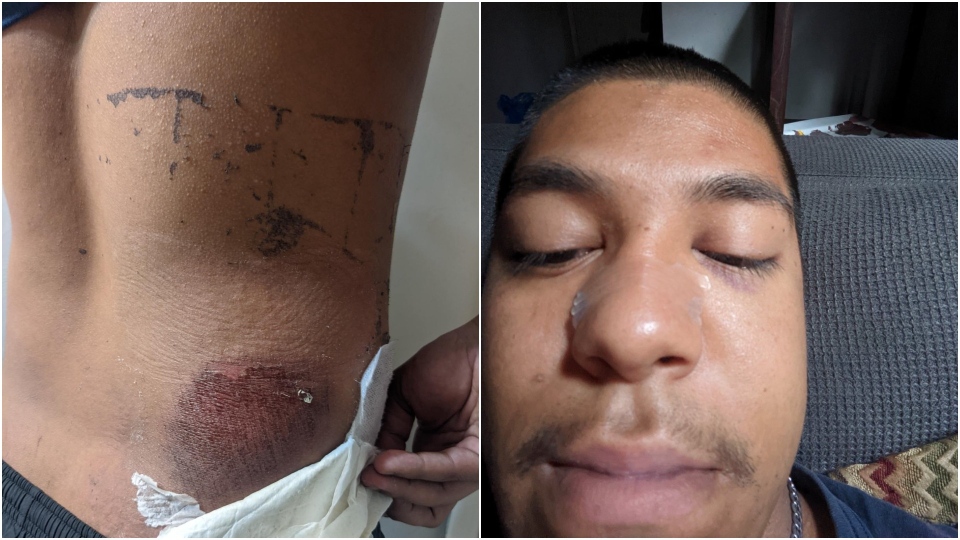 Mark Goudie, CEO of the Redblacks parent company earlier issued a lengthy statement saying in part: “Diversity and inclusion are central to our organizational values, and we will try our best to use our platform to help make acts of hatred and violence including homophobia, stop.”

The Canadian Football League also said in a statement, “we want to reaffirm our values: we condemn homophobia, violence and hate. We support inclusivity and diversity.”

Toronto police said the attack happened at the ferry docks near Hanlan’s Point around 11:30 p.m. on June. 5.

They said the victim and another woman got in an disagreement with a group of people, one of whom made homophobic comments. Two men then assaulted Gomez.

Police said they are not seeing a significant increase in hate crimes targeting the LGBTQ2S+ community in 2021 but have seen more reported incidents in June.

Advocates say people in prominent positions are meant to be role models.

“I just think it speaks volumes to how they are meant to carry themselves, you know, both on and off the field, and I think it’s truly horrific,” said Justin Khan of The 519, an organization that advocates for and provides services to Toronto's LGBTQ2S+ community.

”Thanks everyone who reached out with flowers, warm messages and yummy food. Your support is beyond appreciated,” said Gomez in an online post.

Toronto police said Thursday they are looking at all available footage in the ferry docks where the attack took place.

CTV News Toronto asked police if they could confirm if Redblacks player Chris Larsen is part of the alleged group.

A police spokesperson said police would not speculate on those alleged to be involved until charges have been laid.