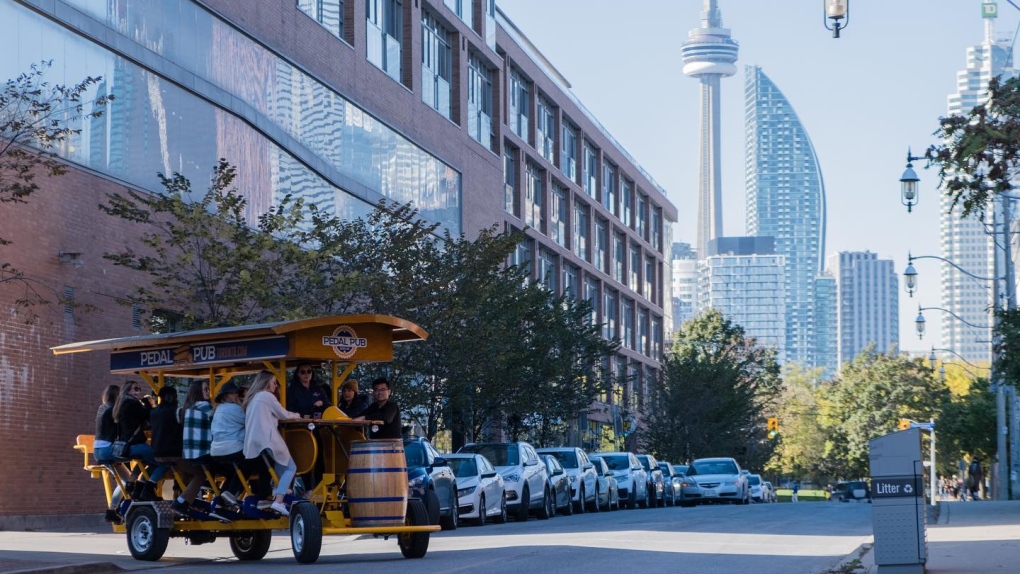 Toronto Pedal Pub posted a photo of one of their pedicabs in the city on social media. (https://www.pedalpub.com/)

Toronto is joining the list of cities to approve pedal pubs—but alcohol won’t be consumed on the road.

Instead, the at least 12 person quadricycles will be used primarily to transport passengers between destinations.

On Wednesday, city council approved licences for eight large quadricycles, with a maximum of 16 passengers for a period of one year as part of a pilot project. No single company shall be approved for more than four licenses.

The owner of the vehicle—also known as a pedicab—would be responsible for covering the cost of insurance and would only be allowed to operate on roads approved by the city.

The city, for its part, can “amend or revoke any approval granted, upon at least 48 hours notice.”

The pedicabs will likely operate in the downtown core and in tourist areas. The city says they will assess the impact on TTC operations, as well as vehicular traffic, prior to approving a route.

In the report, staff said they received inquiries from pedicab operators wanting to operate in Toronto for several years.

“Generally speaking, the proposals received have been by operators wishing to take tour groups between several downtown brewery or winery locations along pre-defined routes,” the report says.

“These businesses generally operate seasonally, with tours running in spring, summer and fall.”

The report cites successful uses of the quadricycles in tourist cities such as Nashville, Boston, Calgary, Saskatoon, Ottawa and Niagara-on-the-Lake.

The owners of Toronto Pedal Pub wrote a letter to city council urging them to say yes to help businesses recover after the pandemic.

“The successful track records of operations and economic impact that Pedal Pubs have had in cities across North America – including in Ontario – stand as sufficient evidence that they can integrate safely on our roads and benefit local businesses in Toronto,” Aleksandra Burke and Lyle Jones wrote.

Their website seems to indicate the tours could be operational as of mid-June. They are offering a variety of tours—their date night package is about two hours long and will stop at three establishments in downtown Toronto.

There will be “drink specials” at select venues.

No route proposals are indicated.