Toronto and Seattle mayors make bet ahead of MLS finals 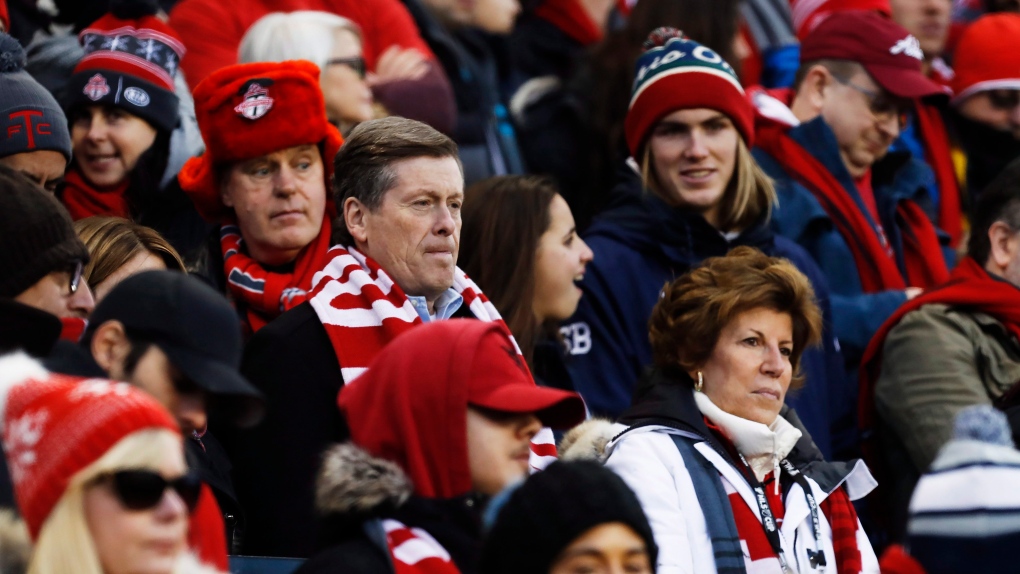 Toronto Mayor John Tory sits with fans as they wait for the start of MLS Cup Final soccer action between the Seattle Sounders and Toronto FC in Toronto on Saturday, December 9, 2017. THE CANADIAN PRESS/Mark Blinch

TORONTO -- The mayors of Toronto and Seattle have announced a friendly bet ahead of Sunday’s Major League Soccer Cup finals.

Toronto FC will face off against the Seattle Sounders around 3 p.m. at CenturyLink Field in hopes of winning the championship. This is the third time the two teams have played each other in the finals.

On Friday, Toronto Mayor John Tory said that he had engaged in a friendly bet with Seattle Mayor Jenny Durkan.

“Toronto is proud of our Toronto FC and ready to cheer them on to victory on Sunday. Our Reds are determined to hoist the MLS Cup once again to help complete a year of championships in Toronto,” Tory said in a statement.

"We know Seattle fans will be out in force in cheer on their team but they will see red!”

In the spirit of the third #MLSCup showdown between the @TorontoFC and @SoundersFC, @MayorJenny and I will be donating $300 to the @UnitedWay for every goal scored by our respective teams. I will make my contribution to @UWGreaterTO while @MayorJenny will donate to @UnitedWayKC.

If Toronto wins the MLS Cup, Durkan will send Tory three albums from Seattle-area artists Brandi Carlile, TacoCat, and Nirvan, in addition to a basket with locally-made products.

Seatte’s city hall will be lit up in red on the following Friday and Durkan will have to wear a Toronto FC scarf for a day.

“Seattle is all in for our Sounders as they get ready to win back the MLS Cup at CenturyLink. Nearly 70,000 fans are going to be loud all game long, and we are going to show why Seattle is North America’s best soccer city,” Durkan said.

“On Sunday, we know our Sounders will hear how proud we are. Go beat Toronto and win back that MLS Cup.”

Seattle is Rave Green - and the @SoundersFC flag is now flying here at City Hall as they get ready to win the #MLSCup at @CenturyLink_Fld on Sunday!

Tory said that “in the unlikely event that the Sounders prevail,” he will send Dukhan albums by Drake, The Weeknd and Blue Rodeo, as well as a basket of Toronto-made products.

The Toronto sign in front of city hall will also be lit up Green and he will wear a Sounders FC scarf for a day.

Both mayors have also agreed to donate $300 to a local non-profit organization for every goal scored by their respective teams. Tory will donate to United Way Greater Toronto and Durkan will give his money to United Way of King Country.

The Toronto sign will be lit up in red as the team takes the field on Sunday.