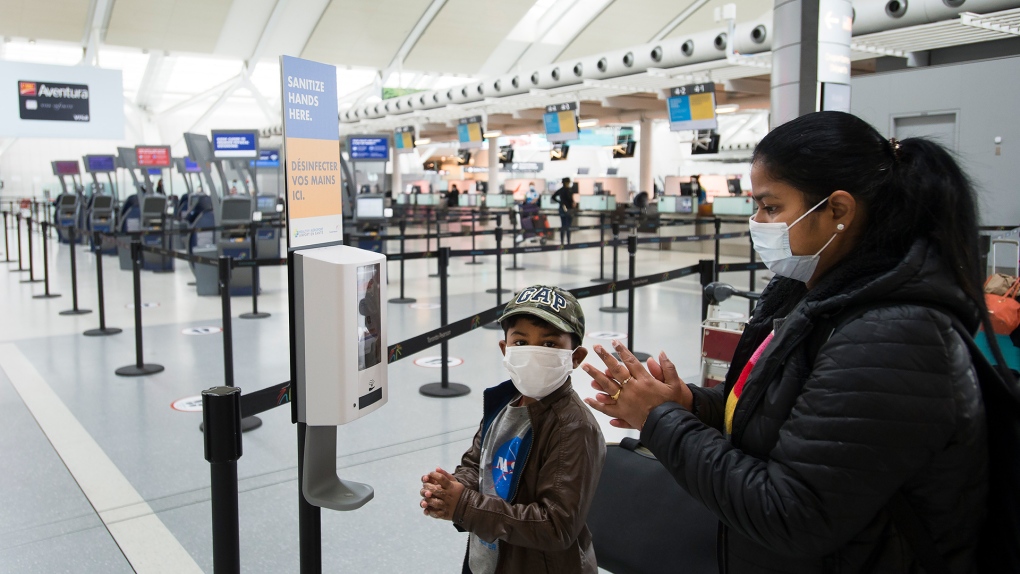 People use mandatory hand sanitizer and masks at Toronto's Pearson International Airport for a "Healthy Airport" during the COVID-19 pandemic in Toronto on Tuesday, June 23, 2020. THE CANADIAN PRESS/Nathan Denette

For those arriving at Pearson International Airport from overseas, there is already a sense of unknown, but now, with the emergence of the new Omicron variant and additional travel restrictions, many travelling out of Toronto are feeling more stressed out because of what it could entail to come back home.

As of Tuesday, Canada is requiring all air travellers from outside Canada, except those coming from the U.S., to be tested at the airport.

The World Health Organization has also put out new advice that people over 60 and those who are unvaccinated should refrain from going abroad.

Canadian and fully vaccinated, Dominic Daniel is going to Nigeria for a family emergency.

“It’s not really too safe to travel right now, but I’m keeping my fingers crossed everything will be okay,” Daniel said.

Nigeria is one of the 10 countries included in Canada’s Omicron variant travel ban. This means that for Daniel to get back into Canada, he will first need to go to a third country — not on the list of affected countries —to receive a negative test result before travelling home. Once home, he will require another test in Canada and then will need to isolate until he receives a negative result.

Vicky Kamine is going to Cameroon to bury her father. She works in a daycare and it isn't clear when she needs to return back to her job.

“I’m worried about that. I don’t understand why — I have my two doses,” she said.

After two years, Brian Motherway is going to Ireland to visit family.

“It’s kinda scary. I think we’ve all been [unsettled] since this all started, but with the vaccine and the measures, it doesn’t feel as scary as a year ago,” Motherway said.

Another man, flying to Denver, told CTV News Toronto that he packed extra medication with him in case his return was delayed. Another couple going to California told CTV News they worried about being able to return to Canada at all.

The timing has many travellers, including seniors and snowbirds going to the U.S., worried what flying back will be like in the weeks ahead, but hoping for the best.