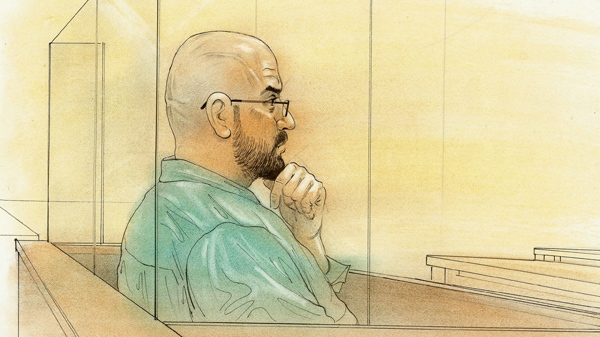 BRAMPTON, Ont. - An informant who was paid more than $4 million by the RCMP to expose his friend's alleged terror attack plans says he wasn't motivated by the money, but by a desire to be a moral, responsible Canadian citizen.

Shaher Elsohemy told a Brampton, Ont., court on Friday that he decided to help police in the so-called Toronto 18 case for many reasons, but greed did not stir him to act.

He credited his "moral responsibility as a Canadian citizen and nothing but that" as the crown capped the third day of questioning during the trial of Shareef Abdelhaleem.

Abdelhaleem, the first adult charged in the alleged plot to stand trial, pleaded not guilty Monday to participating in a terrorist group and intending to wreak havoc by detonating bombs outside the Toronto Stock Exchange, a CSIS building and an Ontario military base.

Defending the huge RCMP payout, the star witness told court that during the first conversation he had with officers in April there was no mention of money, and he willingly gave police information about the plot.

"It's not like the money (issue) was raised," Elsohemy told the court.

He also said he lived a comfortable life as a flight attendant and was, at the time, working on two business projects on the side.

"I was not in dire need of money," said Elsohemy, arguing he was forthcoming with police prior to discussing any payment.

The consideration for money came only after Elsohemy was told about the drastic life change he would face after becoming an informant for police, which would include moving and giving up his business plans.

"The money did not play a role in my motivation," Elsohemy said emphatically.

Elsohemy's payout differs drastically from what another RCMP informant received after helping to snag the group. Mubin Shaikh received $300,000 from the Mounties for informing and giving evidence on the group.

Initially offered a total compensation of $77,000 after agreeing to become an RCMP agent, Shaikh negotiated with authorities and tried to seek more money just before a preliminary inquiry for one of the youths charged.

Again, before the youth's trial in June 2008, Shaikh demanded even more money. He wanted a total of $2.7 million from the RCMP, saying he would refuse to testify. But Shaikh was never given that amount.

There was no reason given in court on Thursday why Elsohemy was paid more than $4 million and Shaikh received far less.

During the testimony on Friday, Elsohemy also described the days leading up to the men's arrests, as the group secured a warehouse to store the chemicals.

He said Abdelhaleem became increasingly nervous, questioning details and worrying if suspicions might be raised about the men unloading a truck that contained ammonium nitrate.

The young men were to shave their beards and dress in uniforms identifying them as agricultural students. But Abdelhaleem began thinking people would ask questions about why the men, who knew each other, had shaven their faces.

He was also concerned about getting caught and used code words about his health to ensure the plan was going through.

Once the warehouse in Newmarket, Ont., was secured, plans were underway to have a truck deliver the chemicals there.

Abdelhaleem asked Elsohemy to tell the young men that "God would reward them for their work."

The chemicals were to be stored in boxes, and the warehouse was to be sealed with wax to prevent people from entering.

"He was stressed that day from the get-go," said Elsohemy, describing the intense, frantic mood.

Elsohemy said when the chemicals arrived at the warehouse, he was to call Abdelhaleem with the message "Thank God."

It was the last conversation Elsohemy had with Abdelhaleem before the arrests.

During cross-examination, defence lawyer William Naylor probed Elsohemy about his rocky friendship with Abdelhaleem, and emphasized early evidence that Abdelhaleem showed, at times, reluctance about his involvement in the plan.

"You also indicated that Abdelhaleem had told Amara the plan was not Islamically correct or politically correct," Naylor asked Elsohemy, referring to the mastermind behind the plot, Zakaria Amara.

Abdelhaleem and 17 other people, who have come to be known as the Toronto 18, were arrested in the summer of 2006.

Amara, the co-leader of the group, was convicted. Three other people pleaded guilty, a youth was found guilty, seven people had their charges dropped or stayed, and five others await trial.