TORONTO -- Top doctors in Toronto, Peel Region and Ottawa are calling on the Ontario government to issue a provincewide stay-at-home order in an effort to control the surge of COVID-19 variants.

In the letter to Ontario’s Chief Medical Officer of Health, which is dated April 4, the doctors say that while they welcome the provincial shutdown, stronger measures are required to reverse the surge of infections.

On Monday, the letter was published on social media by Etches. CTV News Toronto also obtained a copy of the letter from Toronto Public Health.

In the letter, the doctors ask Williams to issue a provincewide stay-at-home order.

“A stay-at-home order issued by the province through an emergency order is necessary to prevent and mitigate large scale morbidity and mortality and irreparable strain on the health-care system” the letter says.

“Stricter lockdowns have been shown to be effective in other countries to control transmission while vaccine campaigns progressed to achieve sufficient population coverage to supress transmission.”

The doctors say the stay-at-home order is also what was recommended by the province’s COVID-19 Science Advisory Table following the release of the latest modelling data.

A four-week provincewide “shutdown” went into effect in Ontario on Saturday that saw gyms and personal care services shuttered. In-person dining was prohibited, however, all retail stores and other non-essential businesses are still allowed to remain open with strict capacity limits in place.

The province said it did not want to issue a stay-at-home order -- similar to the one that was implemented on Dec. 26 – because it produced “tremendous ill effect on both children and adults.” 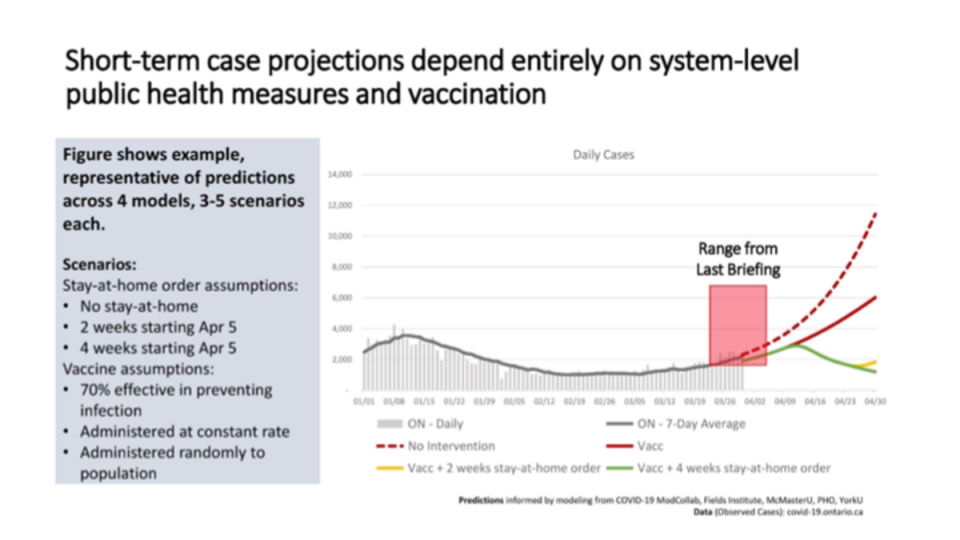 The letter goes on to “strongly recommend” a review of businesses and services considered essential, travel restrictions between regions in Ontario, legislation providing paid sick days and a move to online or hybrid learning “ where local jurisdictions' school outbreaks are significant and capacity to manage is stretched.”

Speaking with CP24 Monday afternoon, Loh said that he knows Williams received the letter and he has been told the government is “going to consider it further.”

“We need to ensure we’re limiting contacts and interactions as much as possible at this point in time.”

A spokesperson for Ontario Health Minister Christine Elliott said that the provincewide shutdown “puts in place time-limited public health and workplace safety measures to help to stop the rapid transmission of COVID-19 variants in communities, protect hospital capacity and save lives.”

“It’s critical to point out that after applying public health measures it takes time for the intended effects of the measures to be realized due to the incubation period of the virus,” Alex Hilkene said in a statement.

“Our government will continue act on the advice of the Chief Medical Officer of Health who will review the science, data and trends along with collaborating with local medical officers of health and our team of expert health officials on if and when public health measure can be loosened or strengthened."

Local medical officers of health do have specific abilities to issue emergency orders under the Health Protection and Promotion Act. On Monday, Peel Public Health a Section 22 order temporarily closing schools and moving all students to remote learning.

Schools and child-care facilities are allowed to operate under the provincewide shutdown.