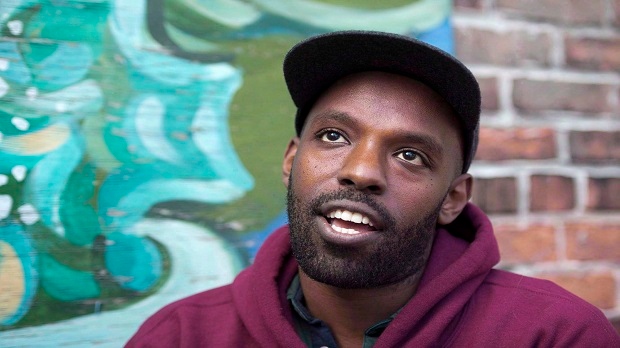 Shad is shown in a 2013 interview in Toronto. The CBC Radio host will exit his role as host of the popular show ``Q'' Tuesday. (THE CANADIAN PRESS/Frank Gunn)

TORONTO -- Listeners told executives at CBC Radio they weren't so keen on the new "Q" -- and so Shad has been given the boot, with his last show airing Tuesday.

After not quite 16 months as host of the CBC's most prominent arts program, the decision was made to remove the rapper from his job, based on an audience survey that suggested the show needed work, said Susan Marjetti, executive director of CBC Radio English Services, on Monday.

"They said basically, 'Be More,"' Marjetti said in an interview.

"'Be more Canadian, be more engaging, be more stimulating. Be more in the know."'

Marjetti, who was appointed to the role last August, asked about 3,000 listeners to weigh-in on "Q" through both focus groups and online surveys undertaken in the spring.

She said the findings clearly showed there was a strong demand for Canadian music. About 73 per cent of listeners said it was "absolutely critical" to feature interviews with Canadian performers and stars from the music industry.

Marjetti was less candid about how listeners reacted to Shad's hosting abilities. But she said he could come back to host another show.

"I've had many conversations with Shad this summer," she said. "We're both very open to exploring new possibilities that will really play to his many, many strengths."

While the CBC declined to make Shad available for an interview they did offer a statement:

"Well, my time at 'Q' has come to a close.... My relationship with the CBC remains strong. We're discussing the possibility of developing a new show together," he said. "In the meantime and either way, I'm looking forward to having more time to put into music and I'm grateful for an amazing experience."

His exit from "Q" comes after his turbulent start in April 2015, when he was parachuted into the job as a replacement for Jian Ghomeshi, who was fired in October 2014.

Shad, whose real name is Shadrach Kabango, came to the high-profile show with little hosting experience and was sometimes criticized for throwing softball questions to his guests and not engaging in deep conversations.

Some users on social media suggested that Shad failed to make the most of a big interview with pop superstar Adele, who spoke about motherhood and how music related to raising her son.

And ratings for the show steadily weakened over time.

In June 2015, after a couple of months with Shad on the air, "Q" was drawing 220,400 listeners on a per-minute basis, a common industry metric. Those numbers were down by 24 per cent this June. And the ratings are down about 28 per cent compared to June 2014, when Ghomeshi was still hosting the show.

Broadcasters in the U.S. also soured to the revamped version of "Q."

Shad was chosen for the job from a pool of nearly 250 candidates, but he knew the gig came with heavy baggage given the allegations that swirled around Ghomeshi's dismissal.

"Certainly -- that was a big deal what went down," he said in an interview with The Canadian Press a month before his "Q" debut.

"If there's something I have to offer, it's that I wasn't around for it.

"So I'm going to try to hop in and have all the optimism and enthusiasm that comes from just starting something brand new; fresh, clean slate."

Tom Power, host of "Radio 2 Morning," will take the reins at "Q" in October. The 29-year-old native of St. John's N.L., joined the CBC in 2008 and hosted the show "Deep Roots," focusing on folk and roots music.

"Tom also is a musician and artist -- but he also is a more seasoned broadcaster," Marjetti said.

A new host for "Radio 2 Morning" has not yet been announced.

Widespread changes have been underway at CBC since the broadcaster fired Ghomeshi after seeing what they described as graphic evidence that he had physically injured a woman. The popular host had said publicly he enjoyed "rough sex" but that it was always consensual.

Later, after a number of women came forward with allegations against Ghomeshi, he was charged with four counts of sexual assault and one count of overcoming resistance by choking. He was acquitted in March on all counts.

Ghomeshi also faced another charge of sexual assault, which was withdrawn after he signed a peace bond and publicly apologized to former CBC colleague Kathryn Borel for "sexually inappropriate" conduct in the workplace. She had accused him of sexually assaulting her at work in 2008. Ghomeshi's lawyer told the court that the resolution was not an "admission" and the judge in the matter also said the signing of the peace bond was not an admission of guilt to any criminal offence.

Marjetti hopes the latest round of changes at "Q" will help the program move further away from its past.

"That show and that team has been through a couple of really challenging years and yet they have done their best to push forward," she said.

"The whole idea now is to take a moment, press pause, do a reset and reinvest in this show to best serve the audience."