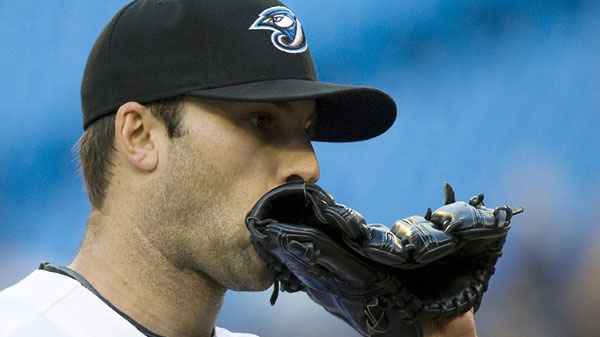 Toronto Blue Jays starting pitcher Brandon Morrow wipes his face with his glove as he walks back to the dugout while playing against the Detroit Tigers during first inning AL baseball action in Toronto on Monday, May 9, 2011. (Nathan Denette/THE CANADIAN PRESS)

TORONTO - Austin Jackson drove in four runs, including a three-run double in a big fourth inning, and Victor Martinez drove in three runs with two doubles and a homer as the Detroit Tigers defeated the Toronto Blue Jays 10-5 Monday.

Detroit starter Max Scherzer allowed two runs in five innings to go 6-0 for the season as the Tigers won three in a row from the Blue Jays after losing the opener of the four-game series. Scherzer tied Jered Weaver of the Los Angeles Angels for most wins in the American League.

Yunel Escobar's solo homer in the third gave Toronto a 2-0 lead that Brandon Morrow could not hold it as the Detroit scored six runs in the fourth.

Morrow (1-2) allowed five runs, three hits and three walks while striking out six in 3 1/3 innings to raise his earned-run average to 4.71.

Jose Bautista, who returned Sunday with a two-run homer after missing five games with neck spasms, started the scoring with a first-inning double to centre that brought home Corey Patterson.

Escobar added to Toronto's lead as he led off the third inning with his third homer of the season.

But Morrow, who allowed a hit and a walk in the first three innings, did not survive Detroit's big fourth that started on his wild pitch that allowed Brennan Boesch to reach first on a strikeout.

After Alex Avila walked with one out to load the bases, Morrow was removed for Shawn Camp who struck out Ryan Raburn before giving up Jackson's three-run double and Ramon Santiago's RBI double.

Martinez hit a two-run homer against Octavio Dotel in the four-run seventh. Dotel then hit Kelly with a pitch on the foot and the third baseman left for pinch-runner Brandon Inge. The preliminary report was that Kelly had a contusion on the ankle was he was listed as day-to-day.

The Blue Jays scored three runs in the bottom of the ninth after Ryan Perry walked the bases loaded with none out. Corey Patterson scored two with a double, but Escobar was thrown out at home trying to score on the hit as well.

Edwin Encarnacion singled in a run with two outs. After Perry hit Aaron Hill with a pitch, closer Jose Valverde entered. After the Jays runners advanced on a wild pitch, Valverde settled down and retired Juan Rivera on a groundout to end the game.