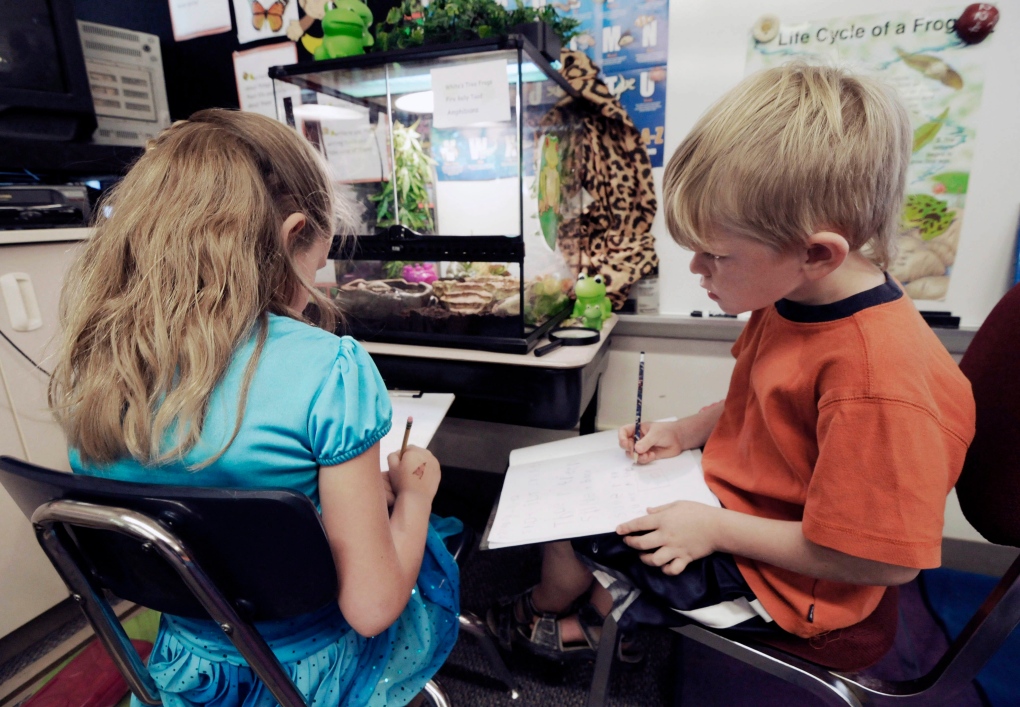 Students are shown in a classroom in this September 2012 file photo. (AP Photo/Jim Mone)

A new report has found that three of the top 10 fastest-improving secondary schools in Ontario are located in the Toronto region.

The annual “report card” on Ontario’s secondary schools, released by the Fraser Institute on Sunday, ranks 740 public, Catholic and private schools across Ontario based on data gathered from province-wide EQAO math and literacy test results.

The report notes that St. Patrick’s progress is even more impressive due the fact that over 25 per cent of its students have a special need and 41 per cent are enrolled in ESL programs.

Also, the school’s average parental income is $43,200 – the lowest among schools ranked in the "most improved" category.

“A school like St. Patrick counters all the preconceptions about student performance,” Peter Cowley, Fraser Institute’s director of school performance studies, said in a statement.

“It has a relatively low parental income, and a relatively high percentage of ESL and special needs students. Yet it’s one of the fastest-improving schools in the Report Card and its overall rating now exceeds the all-schools average.”

St. Mary’s Catholic school also showed significant improvement in student performance, jumping from a ranking of 3.3 in 2010 to 6.0 in 2013, while Bloor Collegiate Institute moved from 5.7 to 7.5

A Toronto school also took the top spot in overall rankings, with St. Michael’s Choir ranking 9.9 out of 10, beating out schools in London and Ottawa.

The median parental income at the semi-private boys’ school is more than $112,000 and no ESL students are currently enrolled.

The highest-ranked public school in the Toronto area was William Lyon Mackenzie, which placed eleventh overall with a rating of 9.0

On the other end of the spectrum, Toronto’s Downsview Secondary School placed among the lowest on the list with a ranking of 1.3.

The North York school has been struggling in the rankings for the past several years, dipping down to as low as 0.4 in 2010.

The study bases school performance rankings on six indicators including Grade 9 EQAO math results, Ontario Secondary School Literacy tests and the number of male and female students in each class.

The Fraser Institute has set-up an online database at compareschoolrankings.com, where parents can compare the academic performances of their child’s school with other schools across Ontario.