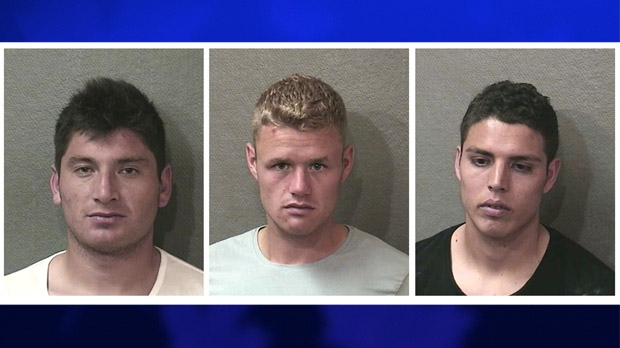 These photos provided by the Houston Police Department show Toronto FC players, from left: Miguel Aceval, Nick Soolsma and Luis Silva who have been charged with public intoxication after police said they got in a fight outside a Houston nightclub and then argued with officers early Monday, June 18, 2012. Toronto FC plays the Houston Dynamo Wednesday night in Houston. (AP Photo/Houston Police Department)

HOUSTON -- Three Toronto FC players have been charged with public intoxication after police said they got in a fight outside a Houston nightclub and then argued with officers.

"We are aware of the charges filed against Miguel Aceval, Luis Silva and Nick Soolsma in Houston earlier today. The players are presently with the team and we continue to investigate this matter. As such, the team will not provide any further comment at this time," the statement said.

Toronto FC plays the Dynamo in Houston on Wednesday night.

Jodi Silva says the three players were involved in a "large fight" outside the club about 2:30 a.m.

Officers intervened, police say, and the three players "refused to leave the location and became belligerent" with police.

Police say one player tried to flee the scene on foot, but was caught. No one else was arrested.

Toronto FC has a 1-10-0 record, worst in Major League Soccer.

There has been a recent coaching change with Aron Winter leaving and Paul Mariner talking over at the helm.

A Chilean defender Aceval is in his first year with the club. He lost his starting job and has been sidelined with an injury.

Silva, an American attacking midfielder, was TFC's top pick in the draft. He has seen some action this season, mostly as a substitute.

Soolsma is a Dutch forward whose season has been interrupted by injury.