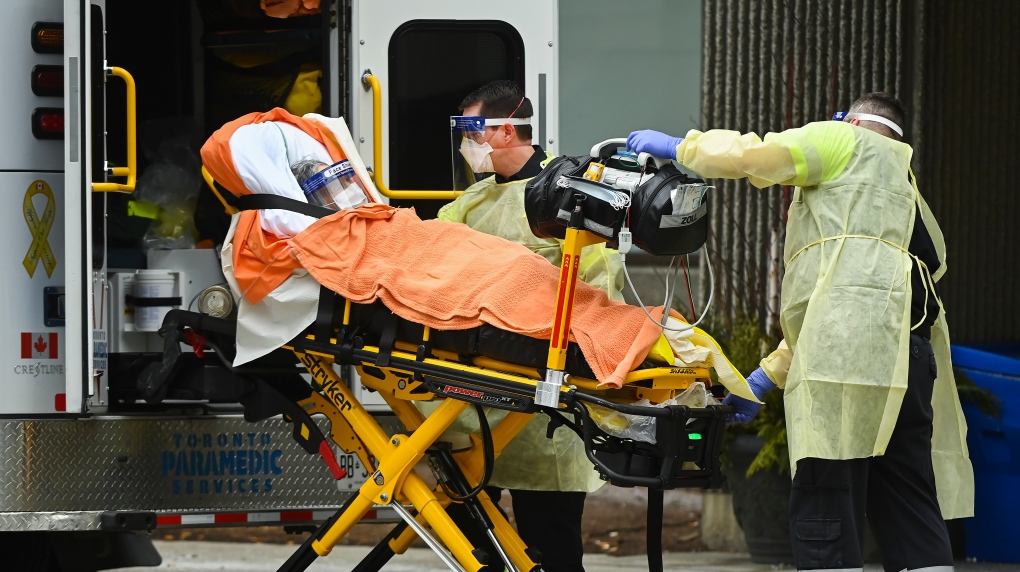 Paramedics take away an elderly patient at the Tendercare Living Centre, long-term-care facility during the COVID-19 pandemic in Scarborough, Ont., on Wednesday, December 23, 2020. THE CANADIAN PRESS/Nathan Denette

TORONTO -- Three more people have died due to COVID-19 at a long-term care home in Scarborough, Ont., which brings the death total at the facility to 52.

Tendercare Living Centre has been dealing with a deadly outbreak for weeks now. Concern and frustration from the families of residents at the home have been mounting as they continue to call for support from the military.

“We express our deepest condolences to those who have lost a family member or friend to this devastating virus,” the North York General Hospital, which is temporarily managing the home, said in a statement on Thursday.

The hospital reported that 78 residents at the home are currently COVID-19 positive. It also stated that 44 resident cases and 56 staff cases have been resolved, and they no longer show symptoms of the virus.

Thursday’s new cases counts and deaths come after residents’ families protested repeatedly outside the nursing home over the past several days demanding better care for their loved ones.

Family members and medical doctors have asked the Ontario government to bring the military into the long-term care home as it did for other facilities during the first wave of the disease, a move that helped save lives and stabilize homes that were dealing with large numbers of infections and deaths.

Ontario’s Minister of Long-Term Care Merrilee Fullerton has said that staffing has stabilized at the home with help from the hospital. However, with death toll climbing almost daily, families say more needs to be done.