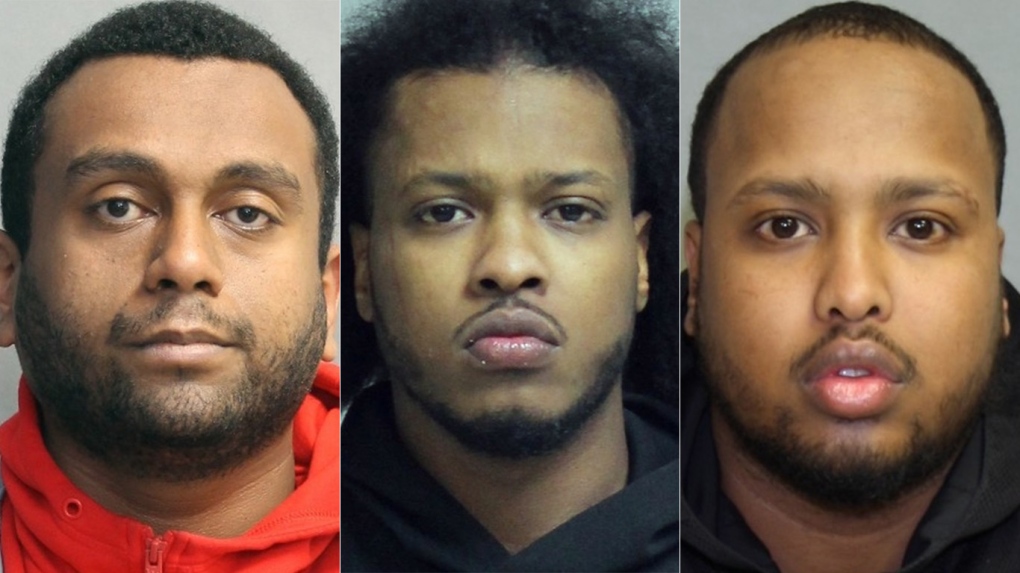 From left: Yonathan Yogi Wolde, 30, Kalid Mohamed, 28, and Abilaziz Mohamed, 32, have been arrested and charged in connection with a human trafficking investigation. (Toronto Police Service)

Toronto police are announcing the arrest of three men in a more than six-month human trafficking investigation that involved an 18-year-old girl.

Officers said the investigation began more than six months ago on Oct. 25. In a Saturday release, they allege that a 17-year-old girl from Edmonton was recruited and flown to Toronto to work in the sex trade once she turned 18-years-old.

For more than eight days, officers said the girl was sex trafficked in Toronto hotels and at a house. Police added that she was also forced to sell illegal drugs.

They said the money she made throughout this period of time was then turned over. A 38-year-old woman was also assaulted during the trafficking period.

Police executed a search warrant and discovered the illegal drugs at a Toronto address.

Thirty-year-old Yonathan “Yogi” Wolde, of Toronto, was arrested on Nov. 11, 2021, and is facing 14 charges, some of which include the trafficking of an individual under 18-year-old by recruitment and possession of cocaine, fentanyl and heroin for trafficking.

The day before Wolde’s arrest, 28-year-old Kalid Mohamed, of Toronto, was arrested and charged with assault causing bodily harm, in addition to two counts of sexual assault.

Thirty-two-year-old Abilaziz Mohamed of Toronto, was arrested on Friday and charged with trafficking by exercising control and assault causing bodily harm.

Police are voicing concern that there may be more victims and are asking anyone with information to contact police at 416−808−7474 or anonymously reach out to Crime Stoppers.

Parents of boy, 2, among dead at Fourth of July parade shooting

Aiden McCarthy's photo was shared across Chicago-area social media groups in the hours after the July 4 parade shooting in Highland Park, accompanied by pleas to help identify the 2-year-old who had been found at the scene bloodied and alone and to reunite him with his family. On Tuesday, friends and authorities confirmed that the boy's parents, Kevin McCarthy, 37, and Irina McCarthy, 35, were among seven people killed in the tragedy.

Jayland Walker was handcuffed when his body arrived at the medical examiner's office: autopsy report

Jayland Walker was handcuffed behind his back when his body arrived at the coroner's office to be processed as part of the investigation into the officers who shot and killed him in Akron last week, according to a medical examiner's report that was reviewed by CNN.

Boris Johnson vows to stay on despite top tier resignations

British Prime Minister Boris Johnson says he plans to stay in power despite the resignations of two top Cabinet ministers and a slew of more junior officials.

A high school friend of B.C. teen Amanda Todd has testified he took action when he saw what he described as a “pornographic” picture of her on Facebook in November 2011.