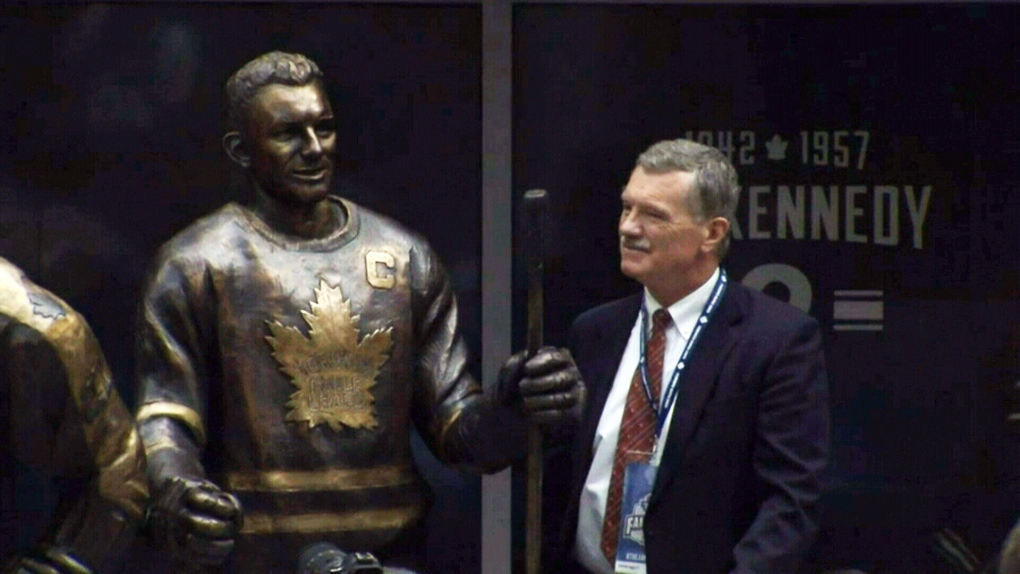 Mark Kennedy, son of Ted Kennedy, at the unveiling of the 'Legends Row' statue at the Air Canada Centre in Toronto on Saturday, Sep. 6.

The Toronto Maple Leafs have officially unveiled the first three members of ‘Legends Row’---a statue being built at the Air Canada Centre that will remind fans of the team’s glory days.

Ted Kennedy, Johnny Bower and Darryl Sittler were immortalized in bronze along a nine-metre-long granite bench. Seven more players will join them before 2017, when the team will mark its 100-year anniversary.

Kennedy helped the Leafs win the Stanley Cup five times in seven years, between 1945 and 1951. His final game was a 14-1 win over the New York Rangers -- the largest victory in Leafs history, according to NHL.com.

His son, Mark, spoke of his father’s strong work ethic Saturday as the blue curtain dropped at the statue’s unveiling.

Sittler wowed fans in 1976 when he scored six goals and four assists in a single game against the Boston Bruins.

Plans for the statue were first revealed in August, but Saturday’s unveiling was part of a Fan Fest weekend.

As part of the celebrations, Bower and other 1960s Leafs were given rings to make up for the ones they didn’t get when they won the Stanley Cup multiple times. Back then, management wouldn’t award new rings to players who already had them.