A three-alarm fire at a popular Parkdale restaurant shut down a stretch of Queen Street West on Tuesday morning.

Crews were called to a reported fire at the three-storey structure, located on Queen Street West near Brock Avenue, early Tuesday morning.

Great work by @Toronto_Fire crews to access and control the fire in this building on Queen Street West. All occupants are out of the building and accounted for without injury. 3rd alarm assigned. @TPFFA pic.twitter.com/G6300NPYtz

Firefighters arrived to find smoke on the ground floor of the building, which houses the restaurant Chantecler and apartments above.

Crews evacuated the building and managed to knock down the fire found on the first floor but quickly discovered that the flames had travelled up the walls at the back of the structure.

“Crews encountered smoke and flames inside and the challenge today was that it got into the walls of the building and extended vertically across all three floors,” Toronto Fire Chief Matthew Pegg told reporters at the scene.

The fire was subsequently upgraded to a three-alarm blaze and at the height of the response, approximately 15 fire trucks were on scene. 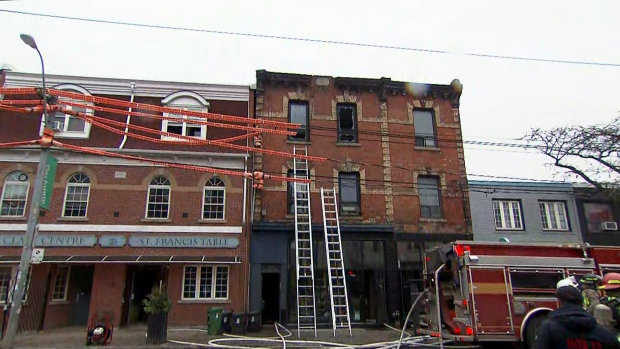 “We really don’t have any choice when we are battling fires like this in this urban downtown core to assign the resources necessary to make sure that it doesn’t spread and in the event that there is excessive spread, that we are already here and deployed to prevent it from becoming much worse,” Pegg said.

Crews did manage to prevent the fire from spreading to adjacent buildings and as of about 7:30 a.m., firefighters had the blaze contained.

“It is hard work to expose that fire and get ahead of it and stop the forward spread of that fire. They were able to do that,” Pegg said. 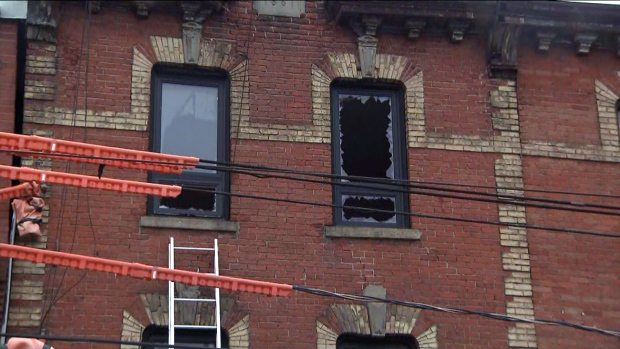 Officials are unsure where the fire started in the building and fire investigators are on the way to the scene to probe the circumstances surrounding the incident.

“Once they arrive, once the operations crews have completed operations, the investigators will commence their origin, cause, and circumstance investigation and ultimately understand where this started,” Pegg said.

Pegg said he could not comment on the damage the building sustained as a result of the fire.

No injuries were reported and a TTC bus has been brought in to provide shelter to residents displaced by the fire.