TORONTO -- Public high schools across Ontario will be closed Wednesday as thousands of teachers take part in a one-day strike after contract negotiations with the government went sour.

The Ontario Secondary School Teachers Federation confirmed early this morning that its union of 60,000 high school teachers and support staff are going on the one-day strike after the union and government failed to broker a deal by the midnight deadline.

High schools at all public boards in the Greater Toronto Area won’t be open all day Wednesday. Classes are expected to resume Thursday.

MORE: What you need to know about the one-day Ontario teacher strike

Harvey Bischof, president of the union, told CP24 Wednesday morning that the union had no other choice after months-long talks with the government stalled.

He said the problems arose after the government’s intention to cut one out four public high school teachers from the system, to impose e-learning on students and to cut thousands of support staff. 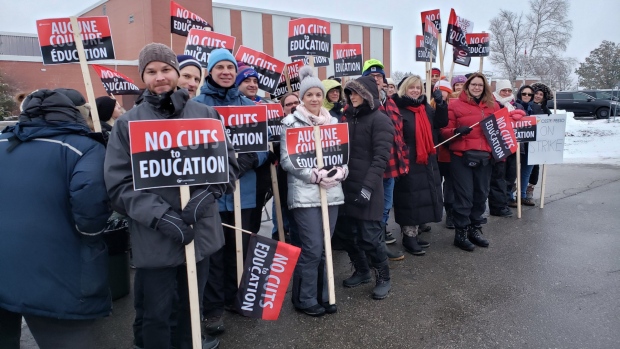 “We have significant quality of education issues that are coming between us … The minister still wants to raise class sizes from 22 and a half to 25, and he calls that an improvement. He wants to go from the current zero mandatory e-learning courses to two,” Bischof said.

“Those aren’t improvements they're erosions to the quality of education and my members and parents have clearly told the government they are not interested in this.”

While Bischof stressed the union’s main aim is to preserve the quality of education, Education Minister Stephen Lecce has said that the main driving force of the disagreements is the issue of wages.

The province and union are having trouble agreeing on the appropriate compensation for teachers. The Ontario government has passed a bill to cap wage increases for all public-sector workers at 1 per cent, however high school teachers are looking for a two per cent increase to account for inflation. 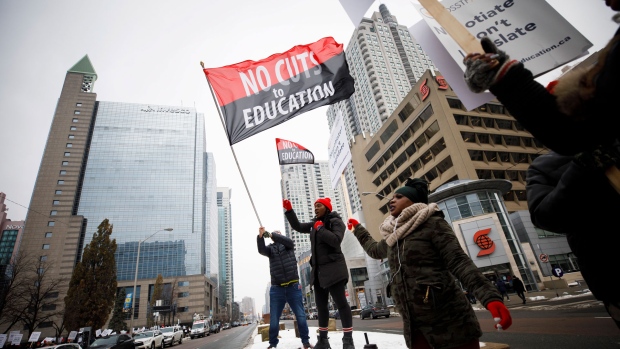 In an interview with CP24 on Wednesday morning, Lecce called the one-day strike "unacceptable."

“To the parents of this province, I find it absolutely unacceptable that their children are not in class this morning. We have been consistently focused on keeping them in class, being as reasonable as possible,” he said.

“If you stand with kids, if you support the future of their education I find it very curious to walk out on them for a day or for any period of time. That doesn’t aid children’s education… It actually frustrates parents and impedes learning for kids and that’s unacceptable.”

Lecce said that he values educations, but that educators in Ontario are the second-highest compensated in the nation.

“They are high paid, they are well paid, and we value they contribution to public service, but at the end of the day, we are offering one per cent, it is a reasonable constructive approach."

Bischof said the union is prepared to go back to the bargaining table anytime.

Education Workers and Teachers are on strike in support of a world class public education system. pic.twitter.com/VggH2Gb861

“We hope we can get back to the table and move forward in a way that’s productive and that secures the quality of education in the province,” he said.

As a result of the strike, hundreds of thousands of public high school students will not be in the classroom today, including students at GTA high schools. Both day classes and night classes are cancelled.

Ryan Bird, the spokesperson for the Toronto District School Board, said Wednesday he’s hoping a deal between the union and government can be reached, but either way, the school board will plan for any situation.

“We have to make sure we have plans in place so that students, staff, parents and everyone knows what's happening,” he said.