TORONTO -- The Ontario government is defending the design of its new licence plate a day after the Ford administration confirmed it was looking into reports that the plates are unreadable at night.

“We have gone through a rigorous testing program with our stakeholders to ensure that the new plates for Ontario are durable, are absolutely reflecting the key information that the people need to be seeing,” Thompson told reporters on Tuesday.

Thompson was asked about the issue after a number of posts to social media earlier this week, which appear to show the plates being almost impossible to read when light is reflected on them at night.

In fact, the Kingston Police sergeant who first highlighted the issue has since reported seeing a number of the new licence plates with the same issue.

It appears to be something with the reflective nature of the alphanumerics on the plate, because in regular light or daylight they're white and more prominent. Unfortunately policing doesn't cease once the sun sets.

On Monday, Thompson’s office confirmed that it was “looking into” the reports of readability issues in dark light conditions.

“We have been made aware that some Ontarians are reporting concerns with readability to the naked-eye under certain light conditions,” Thompson said.

On Tuesday, Thompson reiterated that she was aware that “some Ontarians” are reporting concerns and that the government takes the feedback seriously.

“With any issue, we receive feedback and we take it back. But I can assure you that we have been exhaustive with our testing . We have tested in terms of readability, reflectivity, and durability on a whole host of weather conditions and they [the plates] passed. And they were tested for readability at night.”

"We are confident in the plate that has been presented. They work—but as with any issue, I'm sure you can appreciate, we welcome feedback." 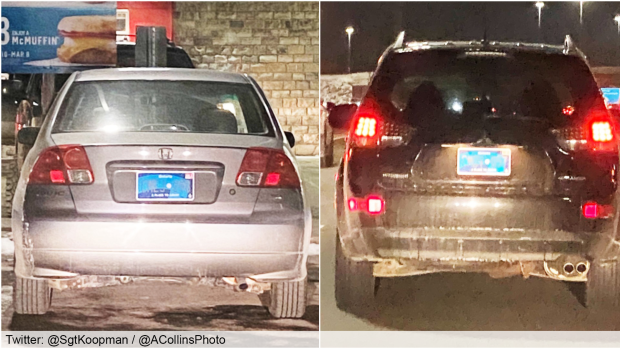 Despite that, when asked how the government was going to fix the apparent problem, the minister instead criticized the previous plate design and the Liberal government that implemented them.

“I’m sure everyone here today would agree with me, whole heartedly, that the status quo, the flaking and peeling Liberal plates were not an option to stick with,” Thompson said.

“Ontarians deserved better and we’re delivering on that,” she added.

The apparent licence plate design flaw made its way into question period Tuesday when NDP MPP and Infrastructure and Transportation Critic Jennifer French, addressed the issue.

“After a lot of money and a lot of fanfare from this government we have been hearing from the community that the new licence plates that rolled out on February 1st are next to impossible to read in the dark,” French said.

“Does the premier have the sense to recognize that this is something that needs to be fixed and what is the plan to fix the plates?” 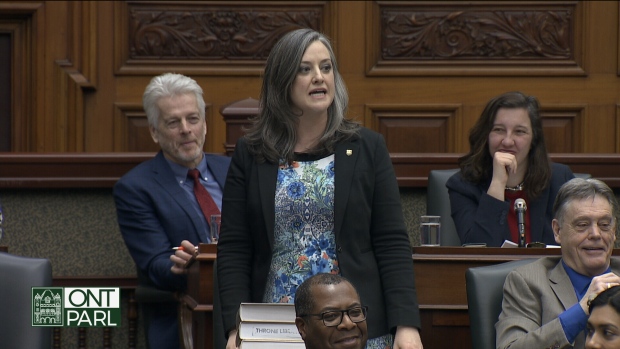 Minister Thompson fielded the question, and once again highlighted that the plates were tested under a whole host of visibility conditions with successful reading results but stopped short of saying how the government aimed to fix the problem.

“We are aware that some Ontarians are reporting concerns with regards to readability to the naked eye under some light conditions. That said, we take this input very seriously and we’re working with our manufacturers to get down to the bottom of it,” Thompson said.

Thompson added that the technology on the new plates has already been adopted by provinces like Saskatchewan and Manitoba and can be read by Highway 407’s automated toll cameras.

Despite that, French reiterated her point by saying that the plates were “weirdly reflective” when lights shine on them.

“The whole plate glows and letters and numbers cannot be read with the naked human eye,” French said.

“I thought Ontario was a place to grow, not a place to glow,” French added, an obvious dig at the slogan featured on the new plates.

Ontario Association of Chiefs of Police aware of 'possible defect'

A spokesman for the Ontario Association of Chiefs of Police said Tuesday that the group has been hearing from front-line officers and concerned citizens about the possible defect.

Joe Couto said the chiefs have relayed concerns about visibility to the government, along with anecdotal reports that some police services' handheld scanners aren't reading the new plates.

"Some officers are surprised and have been taking photos, saying this is what they're looking at," Couto said. "It shows very clearly that, especially at night, there may be some visibility issues."