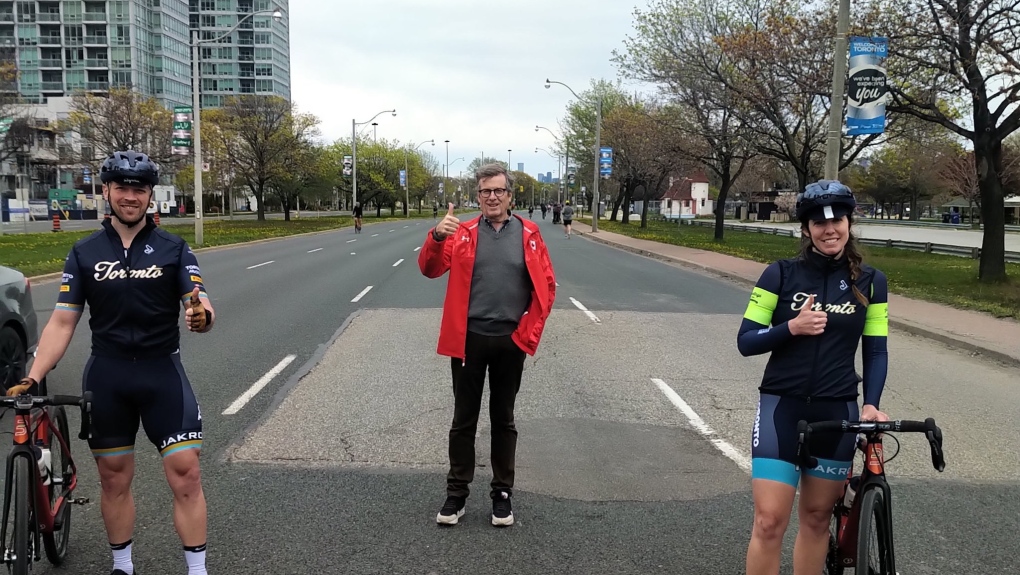 TORONTO -- Three major roadways will close to vehicular traffic this weekend as part of a city-wide effort to give pedestrians and cyclists more space to physically distance themselves outdoors.

As businesses start to reopen in Ontario and the weather gets warmer, more people will be venturing out of their homes after staying shut-in due to the COVID-19 pandemic. In response to this reality, the City of Toronto launched a program earlier this month called ActiveTO, which is meant to help residents adhere to public health measures while walking, running or biking.

The program includes shutting down certain areas to drivers that are near parks or trails where pedestrian traffic may be high. Between 6 a.m. on Saturday and 11 p.m. on Sunday, the following roads will be open to pedestrians and cyclists only:

This is the second weekend the city has closed major roadways and part of ActiveTO. Over the Victoria Day long weekend, all eastbound lanes on Lake Shore Boulevard West between Windermere Avenue to Stadium Road were closed.

A segment of Bayview Avenue and River Street were also shut down.

The closures led to some confusion for drivers who say there wasn’t enough signage notifying them of the changes.

On Sunday, the city closed the ramp to Lake Shore Boulevard from the Gardiner Expressway so that cars could not pass through.

“I think maybe in our haste to get it going, because we knew it was the long weekend and we really did want people to be safe with the congestion that we saw with pedestrians and cyclists, that we might have done a better job,” Mayor John Tory told CP24 over the weekend.

“This thing, we said from the beginning, was going to be adjusted day-by-day and we've made some adjustments today by closing a ramp and it should be better.”

The city has said that in addition to providing roadway signage to alert drivers this upcoming weekend, they will also be managing traffic by making adjustments to signal timing on adjacent routes.

“What we experienced on Victoria Day long weekend was a quick start and common-sense response to areas where there has typically been bike and pedestrian congestion on weekends as the weather gets warmer,” Tory said in statement issued Wednesday.

“I am pleased people were able to get outdoors and enjoy the space and be active while keeping their distance from others.”

The closures are happening on a “trial basis,” the city said, and will be adjusted if necessary.

There will also be about 57 kilometres of local roads that have been designated “quiet streets” that will be open to local traffic only. These streets, which include Kensington Marked, High Park Avenue and Kew Beach Avenue, will have signs and temporary barricades that will open up space for pedestrians.