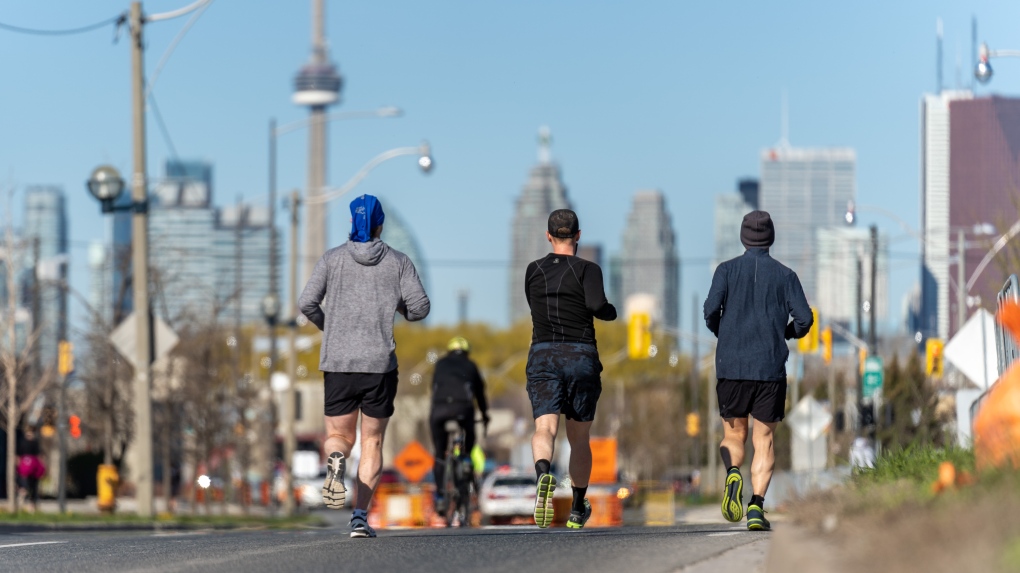 FILE - A group of runners run along Lake Shore Blvd. East as road closures come into effect for the return of the ActiveTO program in Toronto on Saturday, May 1, 2021.THE CANADIAN PRESS/Yader Guzman

Heading out this weekend? Well, there are several road and subway closures in Toronto to keep in mind.

The following roads are closed from 7 a.m. Saturday until 7 p.m. Sunday:

The Meadoway – from Brimley Road to Scarborough Golf Road

The eastbound lanes of Lake Shore Boulevard West are also closed between Windermere Avenue and Stadium Road on Sunday from 7 a.m. to 7 p.m.

The annual Gumball 3000 car rally and events is kicking off in Toronto this weekend and is resulting in several road closures.

Yonge Street between Dundas Street and Shuter Street – from 5 p.m. to 11:59 p.m. on Friday

Yonge SDtreet between Gerrard Street and Queen Street – from 8 a.m. to 4 p.m. on Saturday

Dundas Street West between Victoria Street and Bay Street – from 10 a.m. to 4 p.m. on Saturday

Emergency work continues at the intersection of Yonge Street and The Esplanade. As a result, Yonge Street is closed between Front Street East and Lake Shore Boulevard, as well as the westbound Gardiner Expressway off-ramp to Yonge-Bay-York streets.

Here are the other construction closures:

Jarvis Street, from Carlton Street to Bloor Street East, including Ted Rogers Way, is reduced to one lane in each direction for road resurfacing, sidewalk repairs and intersection safety modifications.

Wellesley Street East, from Ontario Street to Sherbourne Street, is reduced to one westbound lane for bikeway and road reconstruction.

Wellington Street, from Yonge Street to Church Street, is reduced to one westbound lane for TTC track replacement and sidewalk improvements.

Travel lanes on The Queensway, between Parkside Drive and Roncesvalles Avenue, are reduced to a minimum of one shared travel lane in each direction for King-Queen-Queensway-Roncesvalles TTC track replacement and road reconstruction work. People not travelling to the area are encouraged to use Parkside Drive, Jameson Avenue, Lansdowne Avenue or Dufferin Street for north-south travel; and Dundas Street West, Bloor Street West, Lake Shore Boulevard West or the Gardiner Expressway for east-west travel.

There is no subway service on Line 1 between Finch and St. Clair stations on Saturday and Sunday due to the Eglinton Crosstown LRT construction.

The TTC says shuttle buses are running between those stations. There are staff present to guide customers.

The Gumball 3000 car rally events on Friday and Saturday is forcing 19 Bay buses and 505 Dundas streetcars to divert.

Other diversions include 80 Queensway buses to accommodate ActiveTO road closures and 174 Ontario Place-Exhibition buses will not be running from 7 a.m. to 7 p.m. on Sunday. The TTC says the UJA’s 53rd Annual Walk with Israel on Sunday may cause minor delays and service interruptions to 7 Bathurst and 104 Faywood buses.