There will be 'lessons learned' from situation at Trinity Bellwoods Park, Toronto mayor says

TORONTO -- Toronto Mayor John Tory says there will be “lessons learned” from the incident that unfolded on Saturday at Trinity Bellwoods Park, where he says “out of control” crowds gathered to party and enjoy the sunshine.

Toronto police estimated that as many as 10,000 people were at the downtown park on Saturday afternoon, where many gathered in large groups and drank alcohol as police and bylaw officers looked on.

“Lessons will be learned, including by me, and we will move forward and hopefully do better,” Tory said during an interview with CP24 on Monday morning.

While many have been critical of the Toronto Police Service’s response to the situation, the mayor said officers have a difficult “balancing act” when it comes to enforcement.

“There is criticism, you've heard it, long and loud... about excessive ticketing and excessive law enforcement and the heavy hand of the authorities in the circumstances versus a more laissez faire kind of approach,” Tory said.

He noted that had police and bylaw officers known this type of crowd would gather there on Saturday, they likely would have provided more resources to the area. 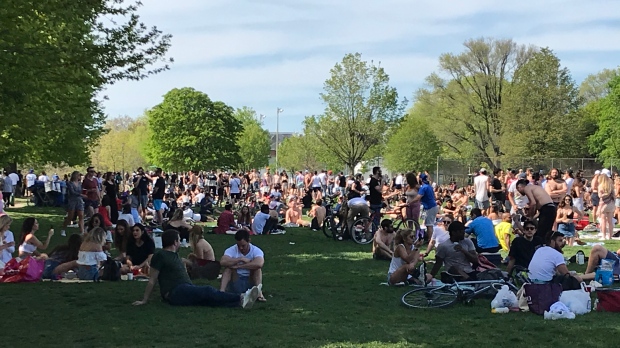 “People are saying it was all predictable. I think a crowded park at Trinity Bellwoods is predictable on a nice, sunny day. This is a massive crowd the likes I have never seen and the quantity of alcohol that was there was extraordinary,” he said.

“But you do get to a point where as that crowd pours in with no fences around the perimeter of the park... it becomes a very difficult task for them to enforce the law in a safe manner.”

Tory added that the city is looking at various solutions to prevent this type of crowding in the future.

“In some parks... they draw big circles on the ground that sort of say that if you are going to have a group of people that are going to be properly social distanced, then you have to sit in these circles,” Tory said.

This is Domino Park in Brooklyn, along the East River. Circles were drawn on the astro-turf to keep people at least 6' apart while relaxing in the sun. And it worked! Park goers were very respectful!#SocialDistancing#COVID__19 #deconfinementJour7 #coronavirus #COVID19 pic.twitter.com/kan6X1O2RA

“The problem becomes how do you enforce that when you put limits on every park? We have 1,500 parks in Toronto…. There has to be a degree of personal responsibility.”

The mayor was quick to point out that the situation at Trinity Bellwoods Park this weekend is not indicative of what went on across the city. 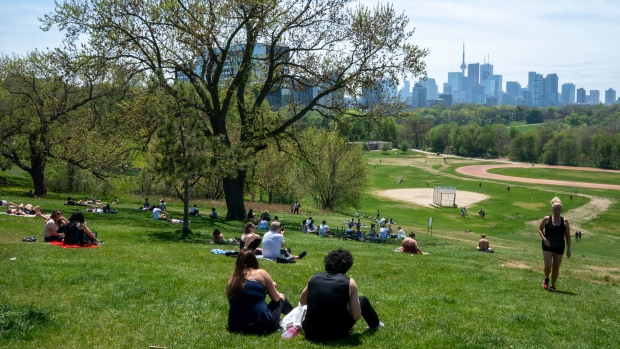 “There were parks that had lots of people in them, spaced out properly, and it wasn't a problem. There was a particular problem at this one park,” he said.

“It is the nature of that neighbourhood in terms of the highrises and what not. And we are going to have to take another look at that, hopefully without restricting the ability of people being able to use that wonderful park because those people don't have a backyard in many cases.”