'The water was coming like a fountain': Pipe bursts, leaks for days at Falstaff TCH building

Mice and cockroaches were crawling out from a gaping hole in the wall where a pipe burst and leaked for days, according to a tenant in the Falstaff Community Housing Complex.

Water started pouring through the wall in Saba Habane’s fourth floor unit at 40 Falstaff Avenue last Thursday and continued to leak on and off for four days. A video she took shows gushing water from a corroded pipe in her kitchen, next to her refrigerator.

"The water was coming like a fountain, like a falls," Habane said to CTV News Toronto. "The water goes running all over the house -- the rug, the couch, everything is wet."

She immediately reported the incident to Toronto Community Housing, but for days, there was no action. The pipe continued to intermittently spill water into the apartment until Monday, when a crew entered the unit to replace the part of corroded piping. 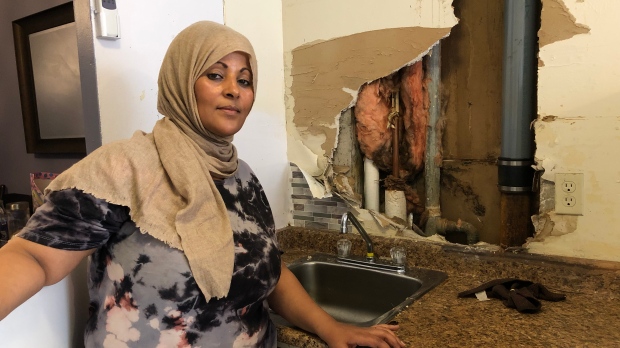 More than a week later, however, the hole in the wall has still not been patched, causing health concerns for her and her three children.

"They're coughing," Habane said. "And the mice are here, cockroaches. Not the cockroaches like small size, the big cockroach."

It's is the second time in a year Habane has had to replace her furniture due to flooding. The first time, she said, was in December 2018 after dark, murky water rose from her bathtub and toilet and flooded most of the apartment.

The single mother of three is in college to become a Personal Support Worker and says she doesn't know how she will afford to replace their belongings.

CTV News Toronto showed the video of the flooding to Toronto Community Housing's CEO Kevin Marshman, who said incidents like this are the reason behind an organizational restructuring process announced on Friday.

The changes include decentralizing decision-making, hiring more superintendents, cleaners and support staff, creating local service hubs across the city, and investing $5 million a year to expand hours of service.

"It centres the services around the superintendent and a team of individuals that can support them on tenant services and community support, so that when tenants reach out to our superintendent, that they can help make the decisions faster."

After CTV News Toronto inquired about Habane’s unit on Friday, the superintendent visited the apartment to identify the repairs needed. Staff committed to getting back to Habane by Tuesday afternoon with a repair plan and a timeline.