TORONTO -- Toronto Raptors president Masai Ujiri says a lawsuit filed against him by a northern California sheriff's deputy is "malicious."

Alan Strickland alleged in the lawsuit filed Friday in a northern California district court that he suffered injuries "which caused and continue to cause great mental, physical, emotional and psychological pain and suffering" after a shoving match with Ujiri.

The incident occurred June 13, after the Raptors won the deciding Game 6 of the 2019 NBA Finals against the Golden State Warriors at Oakland's Oracle Arena. Ujiri went onto the court to join his celebrating team, when Strickland stopped him because the Raptors executive didn't provide the proper on-court credential, leading to a shoving match that was partially captured on video.

Several bystanders intervened and Ujiri got onto the court without displaying any credentials.

Prosecutors decided in October not to press criminal charges against Ujiri.

"It's malicious in a way," Ujiri said Wednesday in Dakar, Senegal. "To me it's incredible that things play out like that. I think something incredible was taken away from me and I will never forget it. It is one of the things that drives me to win another championship because I want to be able to celebrate a championship the right way. This thing will be settled. The truth will come out. The truth will come out of this."

"It's incredible that this malicious kind of claim, if I've been dismissed with the criminal case, then I really don't know what this means for me. There is no case there and I look forward to whatever is coming."

Strickland and his wife, Kelly Strickland, are seeking US$75,000 in general damages, as well as other compensation including punitive damages, lost wages, current and future medical expenses and legal costs.

The Raptors, team owner Maple Leaf Sports & Entertainment and the NBA were also named as defendants in the lawsuit. None of the allegations have been proven in court. 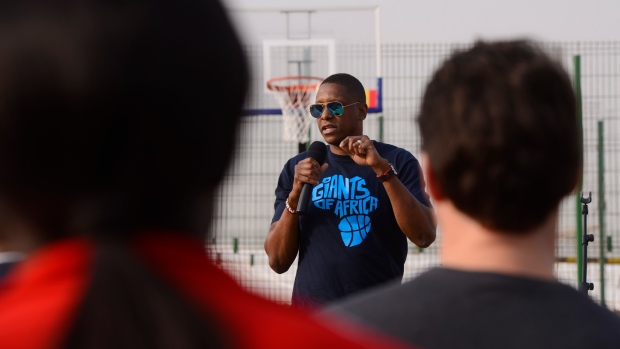 Ujiri was speaking a basketball event to promote the 2022 Youth Olympics, which will be in Senegal, and highlight a co-operation agreement between the Canadian and Senegalese Olympic committees.

This report by The Canadian Press, with files from Mia Rabson in Dakar, Senegal, was first published Feb. 12, 2020.