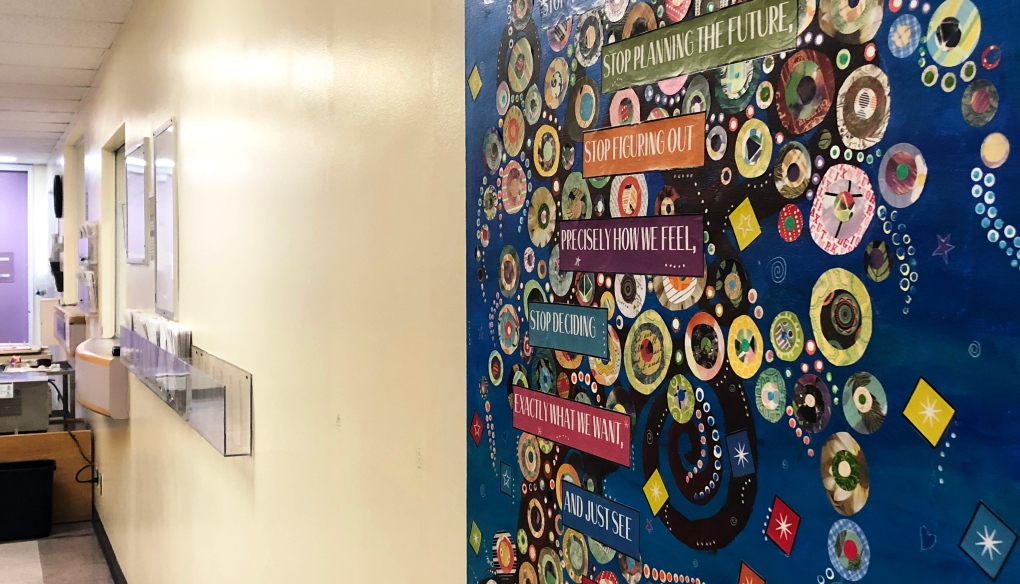 TORONTO -- Just days before Christmas, local artist Eve Crandall walked into the psychiatric unit at Mount Sinai Hospital in downtown Toronto with feelings of hopelessness and thoughts of suicide clouding her mind.

The walls of the unit’s narrow hall showcased some of her artwork filled with messages of hope and colour, but as she walked past them that December day toward her acute-care bed, she firmly believed that no one would be able to help her this time.

At 63-years-old, the Toronto woman has been in and out of Mount Sinai for years after she was diagnosed over two decades ago with Bipolar II, a disorder characterized by cycles of depressive and hypomanic episodes.

She said her recent struggles with various physical ailments, including issues with her eyesight, had taken a toll on her mental health, forcing her into a deeply depressive state, and into the hospital.

“[Depression is like] you are walking through grey Jell-O, where everything feels slow and heavy and dark, and bleak and hopeless, you’re sort of fighting your way through,” Crandall told CTV News Toronto.

“Best I can do is play games on my phone and even that wears me very quickly, there is no motivation to do art, there are no ideas, nor is there the physical energy to pull things together.”

Crandall eventually did get better earlier this month after her hospital stay, and just weeks after she returned to her High Park home, she spoke to CTV News Toronto about her healing process.

It was partially due to a weekly creative expressions group, she said, that was nestled inside a small room at the end of Mount Sinai’s psychiatric unit and spearheaded as a side-project by a spiritual councillor at the hospital. 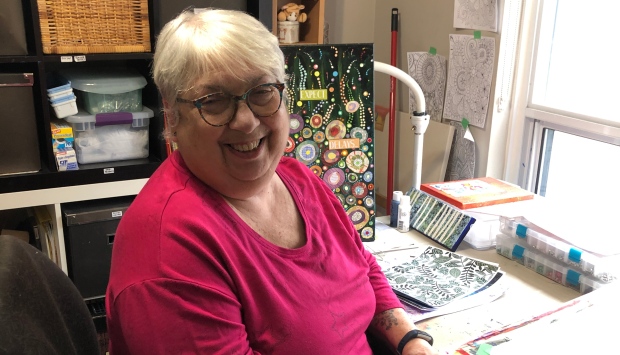 “I don’t know about everybody else but I certainly looked forward to our weekly get-together,” Crandall said. “It’s freeing, it lets you play with colour and form, just everything, and it takes you out of this world and into the art and that’s liberating, it feels good.”

Crandall said every time she returned to the hospital over the years, she always sought out spiritual care practioner Christina Dashko, who had created the art group almost 20 years ago to help psychiatric patients find some peace and joy in making stuff with their own hands. Crandall said the program would almost always force the gears in her mind to start thinking about the art material she had back at home, and what she could do with it.

“It was forward thinking, and that’s really important, if you do start making plans and thinking about the future and what you could do that’s a definitely a sign of improvement,” she said.

“I stopped thinking about all that I couldn’t do and started trying to think about what I could do with my [physical] limitations.”

Dashko told CTV News Toronto that while most support on the psychiatric unit is talk therapy, the program offers something a little different, something more creative. 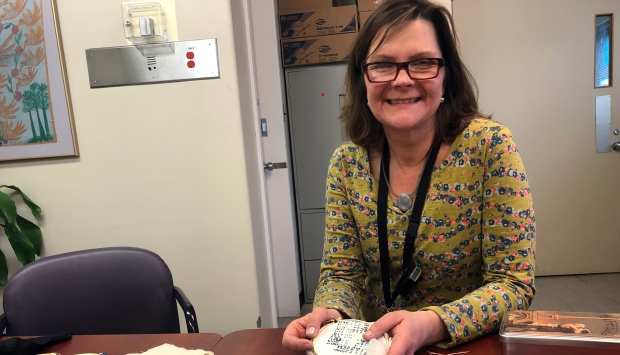 “When someone is suffering from depression or is on this floor, any milestone is a big deal. To be able to say ‘I did something today,’ even if that something is as simple as knitting a single row, gives patients a sense of accomplishment,” Dashko said.

“I think in the greater scheme, in comparison to people doing surgery and stuff, I do very little but I think that I can offer them a space while they are here, where they are valued simply for who they are.”

The group has done everything from knitting colourful hats to creating dual portraits, which illustrate the face a person may show to the world and the one they keep inside to themselves.

She said the dual portraits sparked serious conversations last week when a patient spoke about how their interior world is sometimes filled with sadness and anger, but society, family and friends don’t want to know about that. 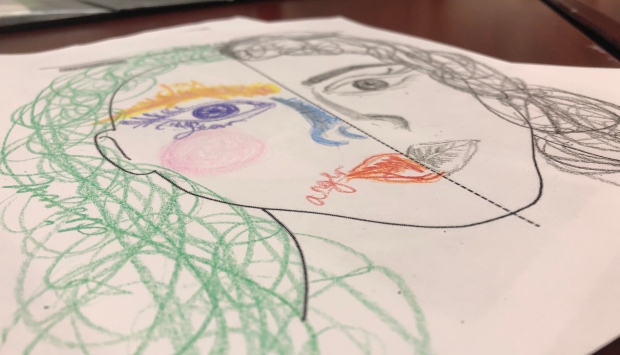 “People want to assume that if you are smiling that you are fine because it’s easier,” Dashko said.

“Once you take the energy to really ask how somebody is doing there’s kind of an obligation to follow through on it and most people don’t want to invest themselves.

"Here in the inpatient psychiatry we hope that people share what is really going on inside of them.”

She said the program helps build community on the unit by encouraging people to try something new, and building a connection between the members through that shared experience. 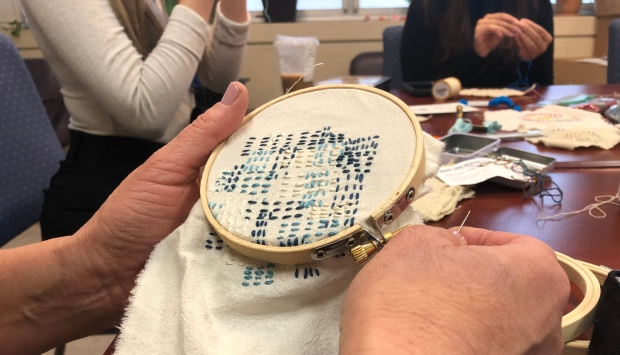 Crandall said she would sometimes come to the program just to watch others making art if the task was something she couldn’t do because of her blurry vision. She said it helped her feel less isolated.

She said she loved watching people, who have never done art before, develop passion for their project.

“I stay the whole time and just sit and enjoy the vibe,” she said. “They [the patients] get into it, they’re not thinking about what ails them, or why they are miserable, they just think about what they are doing, a very mindful way to be.”

“I feel like it connects me to them because I understand it and I experience that myself, and it gives us a connection, something in common.” 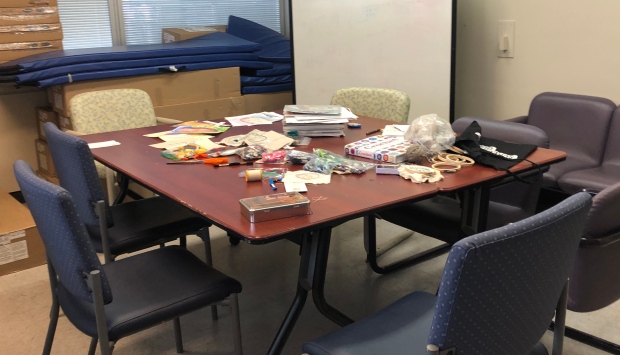 Crandall said she didn’t care what they were doing during the group, but that she just enjoyed the fact that there was an opportunity to do something.

“You feel like you know someone a little better when you are there, people start saying hello to each other in the hallways,” she said.

“It certainly made a difference to my mood, I just felt more connected to people, I start talking to them … not very serious conversations with people but just conversation, just connecting with each other so you are not alone.

“The feeling of isolation is very common, and if you can somehow break that feeling and reconnect with the world, it brings you forward, it’s healing. I think it’s important for that.”

Crandall said she now paints at her home and at Workman Arts, a mental health and art organization in Toronto that will showcase her art in their exhibition in March. 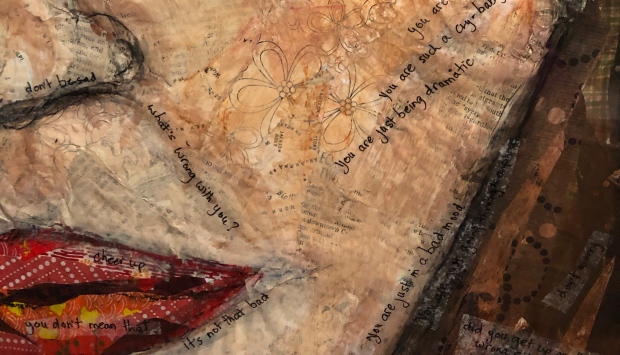 She said one of her favourite pieces she ever made is a portrait filled with invalidating statements. She said the piece was inspired by her annoyance of people who advise her to “think more positively.”

“It makes me crazy, it puts pressure on people, it just dismisses what they are thinking and feeling, [but] this how I’m thinking and this is how I am feeling, maybe if you just acknowledge it, it would help.”