TORONTO -- For the second year in a row, the City of Toronto painted the physical distancing circles on the grass at Trinity Bellwoods Park, inviting the neighbourhood to enjoy the outdoors while staying at a safe distance from each other.

“I love them,” resident David Davidson said. “They’re a little silly, crop circles, how did they get here, did aliens bring them here, but of course that’s not the case.”

Dave Loverock is in charge installing the safety project for the City of Toronto.

“It is just a simple process squaring out the field and measuring out the circles, make sure you have the right distance in between them, enough room for three people in the circle or two people to lay down.”

Most people in the park were adhering to the three sitting or two laying down rules, but one group were clearly breaking the rules, and not willing to comment to CTV News Toronto. For the most part, park goers, many out of work during this pandemic, welcomed the circles and the outdoors.

Sophie Boulianne was celebrating her 30th birthday with two friends in one of the circles.

“We’re going to be sitting on the grass, it's not hard to follow these rules, these are just simple things that help. I guess especially Trinity Bellwoods, it gets pretty busy, we live in the area and we’ve seen it when it gets crazy, last summer it was like packed.” 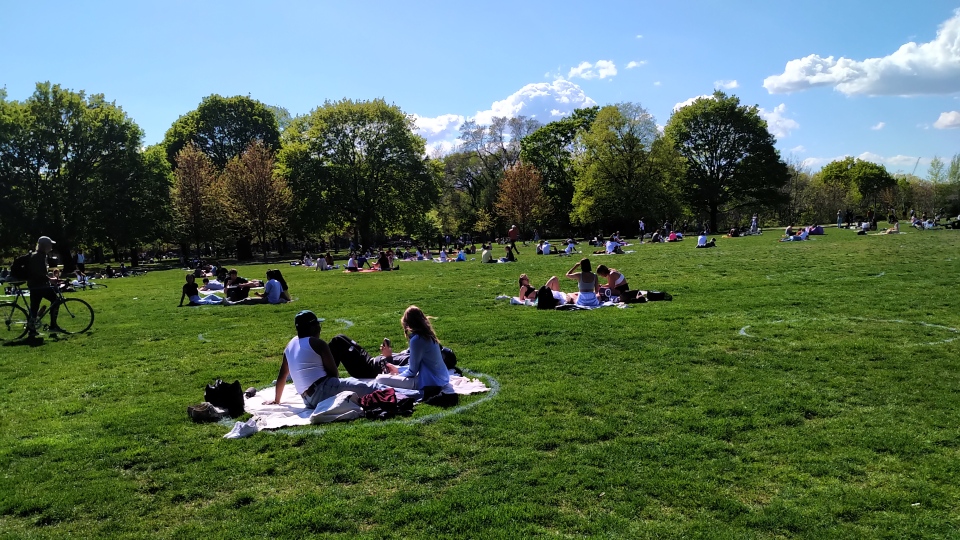 Last summer there were crowds of people gathering in the park, not social distancing until the city experimented with the safety circles.

But there was much frustration as word spread from circle to circle that the provincial government has extended the lockdown to June 2. Heather Low was tossing a baseball with a friend in an otherwise empty baseball diamond.

“As you can see I’m an athlete, usually we would be out here with a group of friends, luckily we are here together”,  she said while pointing to her friend.

But Karlie Fisher says we should get our eye on the end game.

“For the most part I feel we are in the final run , we could say, and I am willing to do what it takes to get to the end of it.