The LCBO has pulled Stalinskaya Silver Vodka from its shelves. Here's why 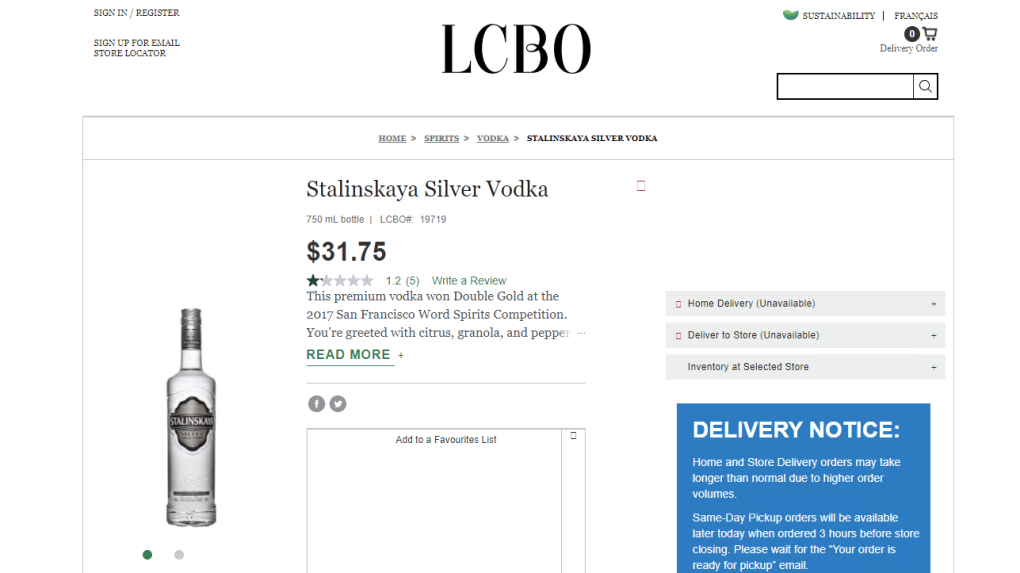 The Liquor Control Board of Ontario (LCBO) sold Stalinskaya Silver Vodka, made in Romania, in store and online, but removed it after complaints surfaced from the Ukrainian community.

“Following feedback from a number of our customers, the LCBO further reviewed Stalinskaya Silver Vodka,” a spokesperson told CTV News Toronto on Thursday. “[We] found it does not meet the LCBO’s name and labelling standards and is no longer available for sale through the LCBO.”

The vodka company, which started selling in Ontario stores in May, writes on its Facebook page that, “Stalinskaya means strength and is inspired by the Russian word stal, meaning steel.”

In response to CTV News Toronto, the company said it’s working on a statement about the issue, which will be available Friday morning.

As the brand hit the shelves, the Ukrainian community began sending letters to the LCBO to stop the sales, saying the name stirs up dreaded memories associated with the Soviet Union and Stalin.

Stalin ruled the Soviet Union from 1927 until 1952, and he has been infamously known for the Gulag forced labour system established during his long reign. His regime is widely criticized for wide-scale executions, deadly famines and ethnic cleansing.

Ukrainian Canada and the Ukrainian Canadian Congress, groups representing the diaspora, wrote a number of posts on social media over the month of June to bring awareness about the issue.

“Stalin deported and annihilated whole ethnic communities of Chechens, Ingushes, Tatars; organized a man-made genocide Holodomor killing millions of Ukrainians; built a regime that has been mass-murdering people with contrarian opinions and beliefs,” Ukrainian Canada said in a post.

Ukrainian community member Nick Krawetz said, like others, he contacted the LCBO immediately after learning the product was sold in its stores.

“Like millions of Ukrainian families, relatives from my family and my wife's tragically lost their lives due to Stalin's tyrannical and murderous policies,” Krawetz told CTV news Toronto on Thursday. “I chose to speak out to honour their eternal memory.”

The diaspora groups welcomed the LCBO’s decision, saying that the crown corporation responded swiftly to the request.